Former Labour-government climate activist, Ed Miliband — who, for some reason, is now the opposition leader — has an interview in the Guardian about his and his party’s performance.

Ed Miliband today lays out far-reaching reforms designed to modernise Labour’s relations with the trade unions, open the party up to the public, and reinvigorate what he describes as its boring annual conference.

The Labour leader regards these changes as critical to his efforts to get the party back in touch with the electorate, and ensure it stays in opposition for only one term.

One way Miliband could make the Labour Party conference less boring is to make himself absent from it and public life in general, assuming that there’s nobody as dull and disconnected as he is, waiting to fill his shoes. The interview continues…

In a Guardian interview Miliband says: “I want to open up the leadership to the party and the party to the country. In a society that is changing so fast in so many ways, we cannot continue as we are, with essentially a closed structure that was formed a century ago.”

Such an admission that the Labour Party is disconnected from the public ought to cause more self-reflection than blaming the legacy of its organisational structure. It’s palpable nonsense, anyway, the structure of the Labour Party of today — never mind its political principles — owes little to the structure of the Labour Party of 1911. Over its history, it has distanced itself from unions, and favoured ‘third way’ and social democracy in place of socialism. It was the Union vote that won the leadership election for Ed Miliband over his brother, David, and that he now seeks to ‘modernise’ the party’s relationship with them is hardly a surprise. Unions, too, have been unable to sustain the numbers of their own membership. Disconnection is rife.

I have a clear sense of where the country needs to go and what needs to happen to the party.

Really? What’s that then? Amongst his proposals is that,

But aren’t Greenpeace already involved in the conversation? Here they are sitting on Parliament’s rooftop… 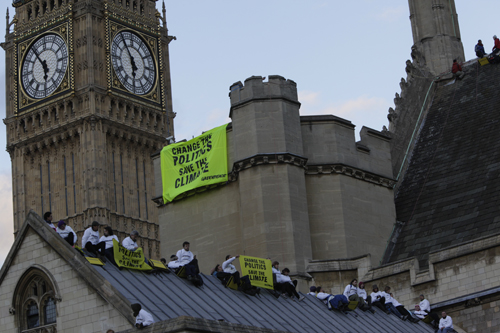 And just to point out that I’m not merely Labour-bashing, but making a serious point here, here’s David Cameron, singing from Greenpeace’s Rooftop.

Greenpeace and other NGOs are already heavily involved in the policy-making process, at all levels Government, national and international. Inviting them to party conferences — where they’re already invited, anyway — will not broaden the debate, but will narrow it yet further.

NGOs have been co-opted by governments and politicians for two reasons. The first is that supposition that NGOs can make government policies appear to be responsive to needs, be they social or environmental. The ‘ethical’ stamp of approval from self-appointed activists thereby gain some semblance of legitimacy: ‘it doesn’t matter that nobody is voting for us, we’re saving the planet’. The second is a supposition that NGOs can help to reconnect the gap between politicians and the public.

But NGOs are neither democratic nor accountable. Their influence is not legitimate. But there’s worse news for Miliband. The idea that NGOs can mobilise popular support is a proven failure. Back in 2009, Miliband, conscious of the fact that the government’s climate policies lacked democratic legitimacy, asked the environmental movement to come up with some bodies,

When you think about all the big historic movements, from the suffragettes, to anti-apartheid, to sexual equality in the 1960s, all the big political movements had popular mobilization. Maybe it’s an odd thing for someone in government to say, but I just think there’s a real opportunity and a need here.

The result was a shambles. Miliband grew closer to the Age of Stupid director, Franny Armstrong, who established the 10:10 campaign and the couple made many public appearances together in which she’d hector him about not taking climate seriously enough, and he’d whinge that there wasn’t enough support. What Miliband hadn’t noticed is just how totally the 10:10 campaign was incapable of generating public support. For starters, the message of Age of Stupid is profoundly anti-popular, and expresses contempt for the unwashed, ever-consuming masses and their desires for more, better, faster, cheaper. This was epitomised in their attempts to ‘connect’ with the public with an advert depicting the violent and bloody murder of individuals — including children — who didn’t appear to be taking the climate message seriously. Climate sceptics, for all the rumours that oil companies give $millions to ‘deniers’ to ‘distort’ the public perception of the climate debate could not have created anything that so succinctly captured the nastiest side of the environmental movement and its character.

The 10:10 campaign’s ill-judged attempt to ‘communicate’ across the divide demonstrated that NGOs serve as outsourced government departments. What this relationship reveals is that, for the likes of Ed Miliband, the legitimacy of his role, and the basis for the policies he creates are after-thoughts. He’s found himself as the leader of the opposition, and is now thinking ‘ok, I’m leader of the Labour Party, now how can I make myself as popular as I need to be to be the leader of the Labour Party’. And it’s as though he’s decided which policies he wants, and now wants to set about making those policies legitimate without actually debating them — call in the NGOs. This is politics upside down. It should be popular support which brings political leaders and their ideas to power. Instead, we see bland and hollow managerial politicians in bed with NGOs employed as public image consultants in some mutually self-serving play for power. Miliband’s programme can only make it a more ugly spectacle, assuming, that is, anyone is even watching.