The BBC’s Frozen Planet is continuing to fuel controversy. First, as discussed previously on this blog, the BBC’s decision to sell the seventh episode of the series — David Attenborough’s personal view of climate change and the crysophere — as an option led to screams and shouts from environmentalists. Environmentalists turned natural history into a morality tale.

A new brouhaha has broken out. A short opinion piece in the Radio Times — the BBC’s ‘what’s on TV’ guide — by Nigel Lawson has got polar Open University Polar Oceanographer Dr Mark Brandon all hot and sticky. Said Lawson,

Sir David Attenborough is one of this country’s finest journalists, and a great expert on animal life. Unfortunately, however, when it comes to global warming he seems to prefer sensation to objectivity.

Had he wished to be objective, he would have pointed out that the polar bear population has not been falling, but rising.

Had he wished to be objective, he would have mentioned that recent research findings show that the increased evaporation from the Arctic ocean, as a result of warming, will cause there to be more cloud cover, thus counteracting the adverse effect he is so concerned about.

Had he wished to be objective, he would have noted that, while there was indeed a modest increase in mean global temperature (of about half a degree Centigrade) during the last quarter of the 20th century, so far this century both the UK Met Office and the World Meteorological Office confirm that there has been no further global warming at all.

What will happen in the future is inevitably unclear. But two things are clear. First, that Sir David’s alarmism is sheer speculation. Second, that if there is a resumption of warming, the only rational course is to adapt to it, rather than to try (happily a lost cause) to persuade the world to impoverish itself by moving from relatively cheap carbon-based energy to much more expensive non-carbon energy.

The Guardian’s resident eco-gossip columnist, Leo Hickman is reporting that Brandon penned an irate response to Lawson’s article, calling it ‘”patronising”, wrong and the “usual tired obfuscation and generalisation”‘. A more sober rebuttal appears on the Open University’s website. The following passage about polar bears caught my eye.

Is it true that polar bear populations are rising, and not falling as reported? 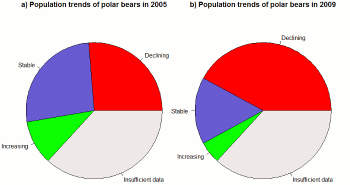 Pie charts struck me as a very peculiar way of representing population decline. It says less than nothing about population. For instance, the graph could be true, yet the total number of polar bears have increased in just the one region under study. Indeed, a million billion trillion zillion new polar bears could have landed in the one area from nowhere, and the graph would look exactly the same. Brandon seems to have taken his stats from the IUCN/SSC Polar Bear Specialist Group, and in particular this page which shows the different regions of their studies, and this table, showing the available data.

The 19 polar bear populations are divided as follows, according to the IUCN. 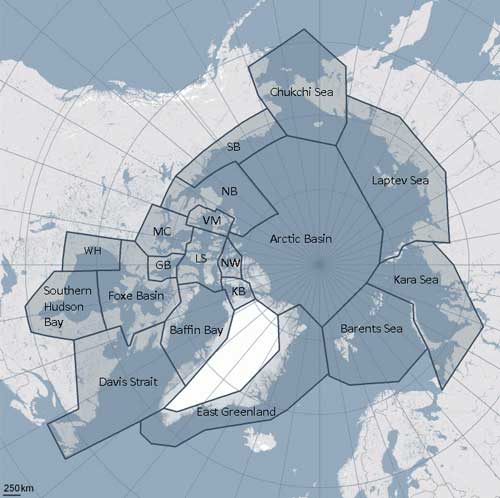 But if we rule out those 7 which ‘don’t have enough data to draw any conclusions’, we begin to see a problem.

There is insufficient data to say anything about the entire Eastern side of the polar region. Now let’s add the regions where populations are understood to be stable or increasing. 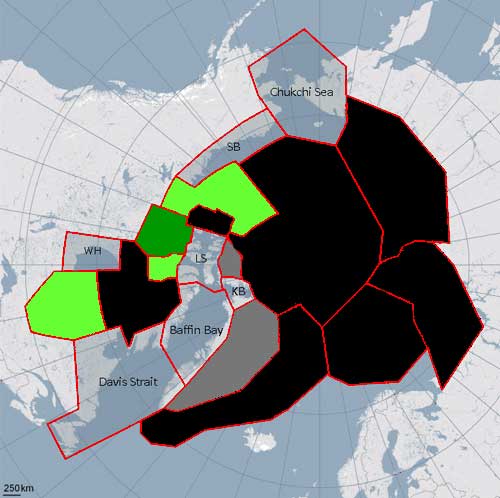 There are now 7 regions, of the 19, which are our focus. Working our way down the image, however, we find at Chukchi Sea that,

Abundance estimates are not available. The trend is believed to be declining and the status relative to historical levels is believed to be reduced based on legal/illegal harvest levels that were thought to be unsustainable. Sea ice loss is one of the highest levels in the Arctic. Combined impacts of high levels of legal/illegal harvest with rapid sea ice loss suggest that the risk for depletion is likely high.

In other words, the population of polar bears in this region have not been the subject of a population study.

Moving on to the Southern Beaufort Sea (SB), we discover the comment that ‘Estimated risk of future decline is based on vital rates estimated from the 2001-2006 data used in matrix-based demographic models that incorporate sea ice forecasts’. Models, not population studies are what see peril for polar bears. And indeed, going deeper into the analysis, it turns out that that,

Again, we see that it is models which predict population decline, not actual population studies. On to Lancaster Sound (LS), the comments for which are that

There’s an awful lot of estimating going on, about estimates of population done 14 years ago. Is this safe? Over to the Western Hudson Bay (WH).

At last, we seem to have a number of studies to work from — a 22% reduction, even though the confidence intervals are quite wide, and do not exclude the possibility of there having been no population reduction at all. Over to Kane Basin (KB), which is,

A small subpopulation of approximately 150 polar bears, estimated in 1997. Harvest is thought to be unsustainable, and the population declining.

Thought to be… Maybe even good reason for thinking it… But it’s still just a thought. Anecdote, not data. On to Baffin Bay,

The current (2004) abundance estimate is less than 1,600 bears based on simulations using vital rates from the capture study (Taylor et al. 2005) and up-to-date pooled Canadian and Greenland harvest records.

The initial subpopulation estimate of 900 bears for [Davis Strait] (Stirling et al. 1980, Stirling and Killian 1980) was based on a subjective correction from the original mark-recapture calculation of 726 bears, which was felt to be too low because of possible bias in the sampling. In 1993, the estimate was again increased to 1,400 bears and to 1,650 in 2005. These increases were to account for the bias as a result of springtime sampling, the fact that the existing harvest appeared to be sustainable and not having negative effects on the age structure, and TEK which suggested that more bears were being seen over the last 20 years. The most recent inventory of this subpopulation was completed in 2007; the new subpopulation estimate is 2,142 (95% log-normal CI, 1811 – 2534). Using new recruitment and natural survival estimates (Tables 3, 4), the 10-year mean un-harvested geometric population growth rate is 0.98 ± 0.001 (Peacock 2009; see Research in Canada, this volume). DS is currently declining based on survival rates calculated from data collected up to the conclusion of the mark-recapture study in 2007. Ecological covariates associated with survival suggest that the decline may be as a combined result of short-term and local density dependence, stabilization of harp seal (Pagophilus groenlandicus) numbers and declining ice conditions.

So in fact the population of the Davis Strait increased over the last 30 years, in spite of global warming, from 726 to 2,142. But now it is supposed that they are in decline, in spite of there being no actual population study.

I’m not impressed. I believed that claims about polar bear population declines were based on polar bear population studies. But in two of these seven populations (Davis Strait and Southern Beaufort Sea) there was good evidence from actual population studies that numbers were increasing, which was overturned in the final analysis by ‘estimates’ of decline. Of the remaining 5, one region seems to have a robust claim to have shown a decline in population, but the rest are claims made on ‘estimates’ and simulations. Time to update the map. 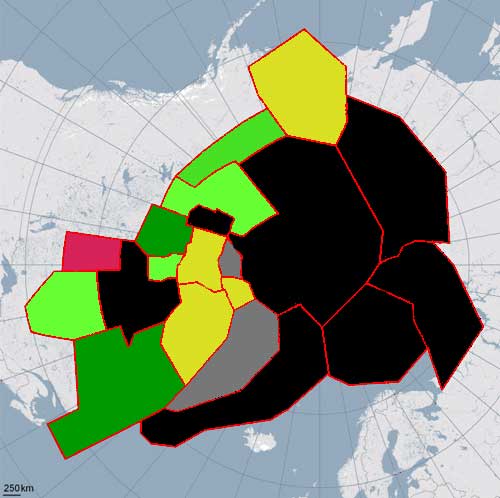 Moreover, the main emphasis made by the PBSG is not the effect of global warming on polar bears, but humans shooting them. They discuss ‘sustainable’ levels of harvesting these creatures, which are ultimately dangerous pests as far as humans are concerned.

Brandon’s silly population pie charts seem to me to epitomise the way ambiguous data is concealed, and given a façade of scientific certainty. More to the point, it was wielded in a public and political debate about global warming policy. And this is the interesting thing about the cryosphere. Since it is so hostile, data series longer than 30 years are hard to come by. It is no surprise then, that this is where we find arguments about catastrophic climate change bury themselves — in uncertainty and ambiguity. The same is true of polar bear populations as it is of sea ice extent and air, sea and surface temperature. Where there are gaps in the knowledge, prejudices, assumptions and speculation fill the void. We see, as a matter of routine, claims that there are only N years left before the summer sea ice will be completely gone from the Arctic, and repeated claims that ‘the Northwest Passage has opened up for the first time in recorded history’. The Arctic and Antarctic are where fears about ‘runaway global warming’ and speculation about positive feedback systems are grounded, precisely because these regions are so poorly understood. And this lack of understanding is the reason idiot self-publicists go on futile missions to swim to the North Pole, or to trek across it ‘while we still can’ with moron scientists in tow, doing far more PR than research. In this respect, the cryosphere is is to climate change alarmism what quantum mechanics is to people preoccupied with parapsychology: it offers a possible mechanism to explain telepathy, ghosts, and even homoeopathy.