The Poverty of Opinion Polls

The Guardian has an article about a poll of Europeans [PDF], which, according to them, shows that ‘Europeans fear climate change more than financial turmoil‘.

I have little time for opinion polls. There is only one real test of opinion, and that is an individual leaving his or her home, and putting an ‘X’ in the box on a ballot paper. And I’m suspicious of opinion polls, too. It is easy to make instrumental use of the attempts to gauge public opinion they hire pollsters to carry out. Questions are too easily framed to elicit the desired answer… are you in favour of motherhood and apple pie, or letting dangerous dogs play in childrens’ playgrounds? And then there is the danger that, if the interviewee has not had to go out of his way to register his view (i.e. to the polling station) then all that opinion polls measure is a weak opinion, not a conviction or commitment to an idea, thus making weakly-held opinion appear as support for a given agenda.

Anyway, back to the Guardian’s headline. The first thing to point out is that Europeans were not polled about their ‘fear’; they were asked about what they believed were the world’s ‘most serious problems’. Second, ‘financial turmoil’ is not a global problem: many economies are not experiencing it. This Wikipedia article lists each country’s growth over the last year. Most economies are growing at fairly healthy rates. This picture puts those statistics into a global perspective. There is a difference then, between a problem with an international dimension, and a ‘global problem’. 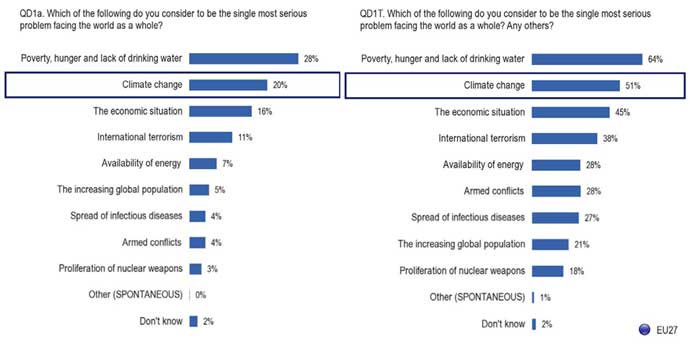 So, out of just eight, the interviewees are in fact to nominate half of the problems listed as ‘the most serious problem[s] facing the world as a whole’.

And look at the problems people are asked to choose from. Concern about ‘the spread of infectious diseases’ and ‘armed conflicts’, rises nearly seven-fold between asking people for one and four of the eight ‘most serious problems. ‘The proliferation of nuclear weapons’ worries six times as many people when you ask people what they believe are the most serious problems, four times. The number of people concerned by ‘the increasing global population’ seems to increase according to the number of times you ask them to nominate one of the ‘most serious problems facing the world’. Why not just ask the same question eight times, and claim that 100% of Europeans think that climate change is ‘one of the most serious problems facing the world’? Eurosceptics amongst us will remember, that this is the MO of the European Union… If you don’t get the answer you were looking for the first time, ask and ask again. If you still don’t get the answer you wanted, insult those you polled, and ignore their answers anyway. I’m talking, of course about the referenda within EU countries, which asked for assent to various treaties, to which the answers were ‘No’, ‘Non’, and ‘Nee’. When did the EU start giving such a hoot about public opinion?

There are further problems. As discussed above, polls such as this don’t really ask interviewees to volunteer their opinion; they ask him or her to chose from the pre-selected list. This may be equivalent to no more than asking them which issues they’ve heard about — a quiz, rather than a poll. Then there’s the fact that opinions, such as they are, really don’t exist in a vacuum. People form ideas about the world by existing within it, and interacting with it. So, for instance, imagine that interviewer offered an argument that may diminish the interviewee’s concern about the issue he or she selected… For instance, had ‘the economic turmoil’ issue been chosen, the interviewer said ‘do you know that only 18 countries are currently experiencing negative growth, would you like to change your selection?’. It’s unrealistic, of course, but the point is that opinions are formed by dialogue. But the biggest problem with the poll is that it forces the presupposition that there are such things as ‘the most serious problems facing the world’ that can be reduced to mere issues devoid of their context. The questions are loaded, therefore, by that familiar maxim, ‘global problems need global solutions’. After all, why else would a supranational political institution, which is most famous for failing to engage the support of its member countries’ populations, be so interested in identifying ‘global problems’? The answer is in the inversion of the maxim: global solutions need global problems.

This is further revealed by Connie Hedegaard, European climate commissioner, quoted by The Guardian,

“This is encouraging news. The survey shows that the citizens of Europe can see that economic challenges are not the only ones we face. A clear majority of Europeans expect their politicians and business leaders to address the serious climate challenge now.”

She said it was “striking” that the public were even more concerned about climate change than in the run-up to the landmark Copenhagen summit on climate change in late 2009.

Another answer might be that the public have simply grown tired of the other ‘global problem’ narratives that once dominated the media, but no longer do. Global pandemics, terrorism and nuclear proliferation, for instance, are more distant memories. In any case, Hedeegard is wrong to suggest that climate change is moving up in the public’s consciousness. Compare this year’s results to the poll conducted in 2008.

It’s more striking that people were less sceptical of climate change policies a year before the Copenhagen summit than either during the run up to it, and since it.

The results of the Eurobarometer poll were hailed by the European commission as evidence that the public across member states maintains its support for measures to tackle climate change. The commission is currently engaged in an argument over whether to toughen the EU’s target of cutting carbon dioxide emissions by 20% by 2020, compared with 1990 levels, to a more stretching target of cutting emissions by 30% by the same date. The poll was conducted in June among 27,000 people from aged 15 in 27 countries.

Hedegaard wants to toughen the target but she is opposed by several other commissioners, including the energy commissioner, Günther Oettinger.

Hedegaard said on Friday: “The fact that more than three out of four Europeans see improving energy efficiency as a way to create jobs is a strong signal to Europe’s decision makers. I see this poll very much as an encouragement for us in the commission to continue fighting for ambitious and concrete climate action in Europe.”

So here’s how it works… You take people by surprise. You ask them to chose from a narrow range of issues. And then you ask them again. And Again. And again. You don’t give them the benefit of making a decision in the context of a debate. And you don’t canvass them for their opinion about costs and benefits, either ‘globally’ or in relation to themselves. You don’t tell them that the results will be used to legitimise certain policies. You compare their opinions to a historic low, and say that the answers demonstrate growing support for your policies — the bases of which have never been tested for popular assent at the ballot box.