The reaction of scientists and environmentalists to The Great Global Warming Swindle has been far more interesting than the programme itself. The most recent tirade against it comes from Professor Mike Lockwood of the UK’s Rutherford Appleton Laboratory. Here he is talking to the The Register:

“That program was so bad it was almost fraudulent,” Lockwood says. “[The subjects raised] made for a decent scientific debate 15 years ago, but the questions have since been settled … The Great Global Warming Swindle raised old debates that are going to be latched on to and used to suggest that we don’t need to do anything about climate change. In that sense, it was a very destructive program”

Lockwood is the co-author, with Claus Fröhlich of the World Radiation Center in Switzerland, of a highly publicised paper published last week in Proceedings of the Royal Society series A, which finds a lack of correlation between recent solar activity and global temperatures. From the abstract:

Over the past 20 years, all the trends in the sun that could have had an influence on Earth’s climate have been in the opposite direction to that required to explain the observed rise in global mean temperatures

‘This should settle the debate’, Lockwood told the BBC. The debate in question is of course the one surrounding the influence of solar activity on recent global temperatures, as featured in The Great Global Warming Swindle. But why was this paper needed at all to settle a debate that, in Lockwood’s own words, has already been settled? It seems that the debate wasn’t quite so settled after all. Indeed, Lockwood told the BBC that his study was initiated partially in response to Swindle.

The Royal Society also seem to consider the paper to be of some special significance, because, although it’s published in a traditional, subscription-funded journal, they have taken the unusual step of making it available in full – and for free – online. And yet the Royal Society still use the opportunity to have a cheap pop at anybody who disagrees with them:

At present there is a small minority which is seeking to deliberately confuse the public on the causes of climate change. They are often misrepresenting the science, when the reality is that the evidence is getting stronger every day.

Presumably, that is not aimed at Martin Durkin, producer of The Great Global Warming Swindle, and the man falsely accused by Bob May, former president of the Royal Society, of being an HIV-AIDS denialist. Because, judging by what Lockwood says, and by the reaction of the Royal Society, Durkin has prompted a landmark study that settles a matter that they thought had been settled fifteen years ago. They should be thanking him.

***EDIT (7 April 2008) Something we missed at the time, and then forgot to post about, is that the press release put out by the Royal Society (purveyor of academic journals, custodian of the facts, and Exxon slayer) billed the Lockwood & Fröhlic paper as “The truth about global warming”. The page has long since been deleted, but here’s a screen grab we took last year: 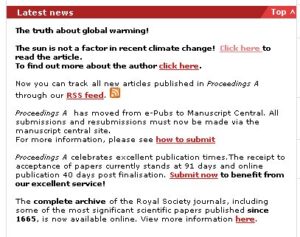