The Environmentalist’s Paradox that Wasn’t a Paradox

Leo Hickman, Guardian’s ‘ethical’ agony aunt, usually occupies himself with the kind of pointless, trivial, and often completely bizarre ethical questions that only trouble the most moneyed and morally-disoriented environmentalist:

Which is the most eco-friendly alcoholic drink?
Should I buy the cheapest school uniform?
Is it OK to use a butterfly net?
Is it OK to go ‘wild camping’?
What’s the most eco-friendly way to dry my laundry indoors?
What’s the best form of carbon offsetting?
What’s the best way to save water during a hosepipe ban?
Can I buy margarine that is palm oil-free?
Should I trade in my old television for a new one?
How green is the iPad?
What’s the one lifestyle change I could make that would have the most positive environmental impact?
How environmentally friendly are 3D glasses?

The questions the self-styled ethical environmentalist answers are conspicuously about how to live a distinctly consumerist lifestyle without guilt — a guilt he as proficient at engendering as he seemingly able to soothe. If these are ‘ethics’ then ethics — the moral philosophy that occupied the minds of Aristotle, Hume, Kant — can do no more than answer the question, ‘how can I continue to enjoy the stuff that makes me feel guilty, yet still feel smug’? So much for ethics… 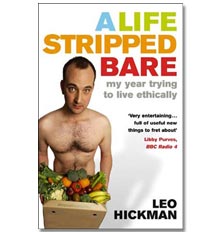 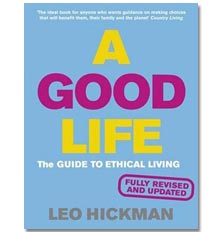 Leo yesterday ventured outside his usual mode of eco-lifetsyle-consumer-ethical advice, to reflect slightly more deeply on the ground of his environmentalism.

Why is human well-being improving globally when our environmental woes appear to be worsening all the time?

This is the ‘environmentalist’s paradox, Leo tells us, and it’s the subject of a new study, called, ‘Untangling the Environmentalist’s Paradox: Why Is Human Well-being Increasing as Ecosystem Services Degrade?’ by Ciara Raudsepp-Hearne of McGill University. [PDF]

The paradox is explained in Leo’s question. Environmentalists have long been promising doom, but since Malthus, life for humans has shown continued improvement. One measure of this improvement we’re particularly fond of citing, and which is briefly alluded to in the study is the fact that according to UNICEF, 10,000 fewer infants die each day than in 1990. This has troubled environmentalists who want to make the claim that ‘climate change will be worse for the poor’, and that the poor experience the effects of climate change already. They make shameless use of the plight of the world’s poor instrumentally to make moral arguments for the mitigation of climate change. Yet their favourite statistic — that 150,000 people die each year because of climate change — is completely swamped by the figure from UNICEF. Clearly, the effect of development over the last 20 years has been to make life better. Yet environmentalists cling to their eco-ethics, and even development and disaster relief agencies, such as Oxfam, absorb them into their agendas. The question we have asked here is why they don’t make an ethic out of development? Why do they insist instead — in spite of clear, empircal, concrete, and testable evidence — make a virtue out of ‘sustainability’?

Normally, such a ‘paradox’ — disparity between what you can see in the world, and what you expected to see in the world — would cause you to stop and reconsider what had led you to your expectation. ‘I’ve got it wrong’, you’d say. Environmentalists maintain that we live in a closely dependent relationship with the natural world, and that our welfare is dependent entirely on measures of its ‘health’, and so expect to see human welfare diminish according to the ‘health’ of the natural processes. This co-relation of measures of health, has been shown, again, and again, and again, to have very little foundation. But instead of reflecting on this failure, the environmentalist says instead, ‘there’s something wrong with the world’.

Leo now cites the for reasons that the study gives, which may explain the ‘paradox’.

4. There is a time lag after ecosystem service degradation before human well-being is negatively affected. Loss of human well-being caused by current declines in services has therefore not yet occurred to a measurable extent.

And Leo, naturally, takes the view that causes the least trouble for his troubled perspective… The apocalypse has simply been deferred…

But perhaps the most intriguing hypothesis – for me, at least – is the fourth. Can the environmentalist’s paradox be explained away by the fact that there is a time lag between when we degrade our finite natural resources and when our well-being begins to be negatively affected? If so, what is this period of time likely to be? And will the transitional descent – when/if it finally begins – be slow or rapid? The answers to these questions will surely be key to working out who will ultimately prove to be correct out of the Diamonds or the Ridleys of this world.

When I think about this time lag I can’t help but be reminded of the set-piece scene from the Oscar-winning Wallace and Gromit cartoon, The Wrong Trousers. Gromit, Wallace’s canny dog, finds himself having to lay track as fast as he can in front of himself to ensure the toy train he’s riding on remains in hot pursuit of the jewel-thief penguin escaping with a diamond. (Go to 1:28 on this video.) Using this as a metaphor, can humans keep laying the train track in front of them fast enough to avoid a nasty derailment? Can we keep perpetually delaying our fall and decline? The authors of the paper seem to be suggesting that our chances of doing so are diminishing all the time as the world becomes increasingly globalised:

Leo confuses the third and fourth ways of explaining the ‘paradox’. He says that Doomsday has been postponed, but wonders if, after all, we’ll be able to keep ‘laying out new track’, implying that it was human agency that caused the disparity between observation and expectation.

On that point, Leo’s view reflects that of Martin Rees in his third Reith Lecture I looked at this week. Rees too wondered what are the limits of human agency…

Humans are more than just another primate species: we are special: our self-awareness and language were a qualitative leap, allowing cultural evolution, and the cumulative diversified expertise that led to science and technology. But some aspects of reality – a unified theory of physics, or of consciousness – might elude us simply because they’re beyond human brains, just as surely as Einstein’s ideas would baffle a chimpanzee.

Rees and Leo both make virtue — and a system of ethics — out of the possibility of the limits of human ability coming up against the limits of their material conditions. And this must surely go some way to explaining the paradox — not the answer to the paradox, but why an environmentalist sees a paradox.

First, a limited view of humans is presupposed far in advance of any understanding of that limit. On this view, presupposing that a limit exists allows you to say that we’re necessarily approaching it, and cannot adjust our situation ad infinitum; therefore we must act as though we are up against our limits right now.

Second, a view of humans is presupposed in which they are simply passive consumers of resources — or ‘ecosystem services’ in the study’s vernacular — instead of the active, creative agents which make them.

Third, an insurmountable limit of material possibility is presupposed to suggest that not only are we not smart enough, there simply aren’t sufficient resources / ‘ecosystem services’ to provide humanity with its growing needs. We can’t even invent our way past such ‘natural’ limits, because any innovation will inevitably tread heavily on some part of the complex network of ecosystems, which will cascade around the system to revisit our sins upon us.

These arguments are all familiar. Their inevitable consequence is that we must organise society in such a way that we can live within these ecological limits. From these environmental ethical imperatives emerge environmental politics.

However, the thing that Leo and the authors of the study don’t seem to have considered is a fifth option: people do not depend on natural processes to the extent that they expected. Hence, there is no paradox to explain. Humans are far less dependent on the natural world than the study’s authors and Leo imagine, and instead depend much more on themselves.

But this would agree that the paradox was real — it would accept the three environmental presuppositions. Which is exactly what the authors of the study do.

evidence suggests that future adaptation will be different and probably more difficult, as  resources near depletion at the global scale. Previously available options for migration and translocations of resource use are increasingly constrained by the scope of human use of the biosphere (Vitousek et al. 1997). Humans have been able to adjust to increased pollution, decreases in soil fertility, and other ecosystem degradation at smaller scales; however, there is evidence of a widening gap between the intensity and complexity of global change and humans’ ability to adapt rapidly and effectively on a large scale (Homer-Dixon 2000). For example, there has been little effective response from the global community on climate change, indicating social inertia in the face of even a well-recognized challenge (Adger 2000).

The study rejects the theory of the ‘decoupling human well-being from the state of ecosystems’ because we haven’t adapted to meet the challenge of climate change. Which is a bit like taking your conclusion as your premise… presupposing what you intended to find out.

Having rejected the possibility that human adaptability explains the paradox, the study is inconclusive…

The environmentalist’s paradox is not fully explained by any of the four hypotheses we examined. Our evidence indicate that we can largely reject the hypothesis that human wellbeing is decreasing; however, some aspects of each of the other three hypotheses are supported, whereas other aspects are invalidated (table 3). For hypothesis 2, it is clear that agriculture provides benefits to humanity, but locally those benefits can be outweighed by the loss of other services. The efficiency with which people have been able to extract benefits from nature has increased, supporting hypothesis 3, but technological innovation has not decoupled society from the biosphere. And while there are many important time lags in Earth’s systems, which supports hypothesis 4, the consequences of those lags for human well-being are unclear.

… and calls for more research. As does Leo, who claims in the title of his article,

We need a better understanding of the ‘environmentalist’s paradox’

Here, then, is the better understanding of the ‘environmentalists paradox’.