The Spy Who Nagged Me

The Guardian has a couple of articles claiming that the UK police infiltrated environmental activist organisations.

He turned up with long hair, tattoos and an insatiable appetite for climbing trees. Few people suspected anything odd of the man who introduced himself as Mark Stone on a dairy farm turned spiritual sanctuary in North Yorkshire.

Legal documents suggest Kennedy’s activities went beyond those of a passive spy, prompting activists to ask whether his role in organising and helping to fund protests meant he turned into an agent provocateur.

There is some speculation that a current trial of protesters may collapse as a consequence.

It’s all very intriguing, of course. But all the talk of the possibility that Mark Stone/Kennedy may have been an ‘agent provocateur’ belies the fact that the state — that is to say the British government, and the UK’s political establishment — wanted the same thing as the protesters: strong, international, legally-binding restrictions on CO2 emissions. The thing which has held the deadlocked government back from realising its ambitions is that dreaded nuisance, the British public, not those dreadlocked nuisances, eco-protesters.

To make the point, here are again two things I’m fond of using to demonstrate the fact that the eco-activists are merely doing what the government want them to do. Here is the current PM, holding a press release at Greenpeace’s London HQ:

Here is the previous Secretary of State for Energy and Climate change, Ed Miliband, now leader of the Labour Party:

When you think about all the big historic movements, from the suffragettes, to anti-apartheid, to sexual equality in the 1960s, all the big political movements had popular mobilization. Maybe it’s an odd thing for someone in government to say, but I just think there’s a real opportunity and a need here.

Maybe the police were worried about what might happen if environmental activists actually succeeded in targeting one or more of the UK’s power stations, disrupting the Grid. I know, it sounds crazy.

But if the police are really worried about public order in the wake of self-righteous activists closing down the UK’s electricity supply, leading to widespread chaos, they should perhaps go and have a word with these sitting-down-activists… 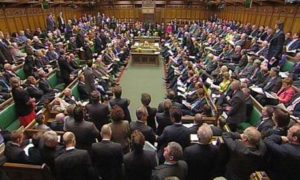 … rather than these ones…