The Guardian — Keeping up Appearances

Ice is the white flag being waved by our planet, under fire from the atmospheric attack being mounted by humanity. From the frosted plains of the Arctic ice pack to the cool blue caverns of the mountain glaciers, the dripping away of frozen water is the most crystal clear of all the Earth’s warning signals.

It’s also sheer BS, and it belongs to Damian Carrington of the Guardian/Observer newspapers. He continues…

Last week saw the annual summer minimum of the Arctic ice cap, which has now shrunk to the lowest level satellites have ever recorded.

Now, is this true? Anthony Watts, who needs no introduction here, has a very useful page linking to sea ice data at his site. Carrington’s claim is true, if we look at the record of ice extent produced by scientists at the University of Bremen: 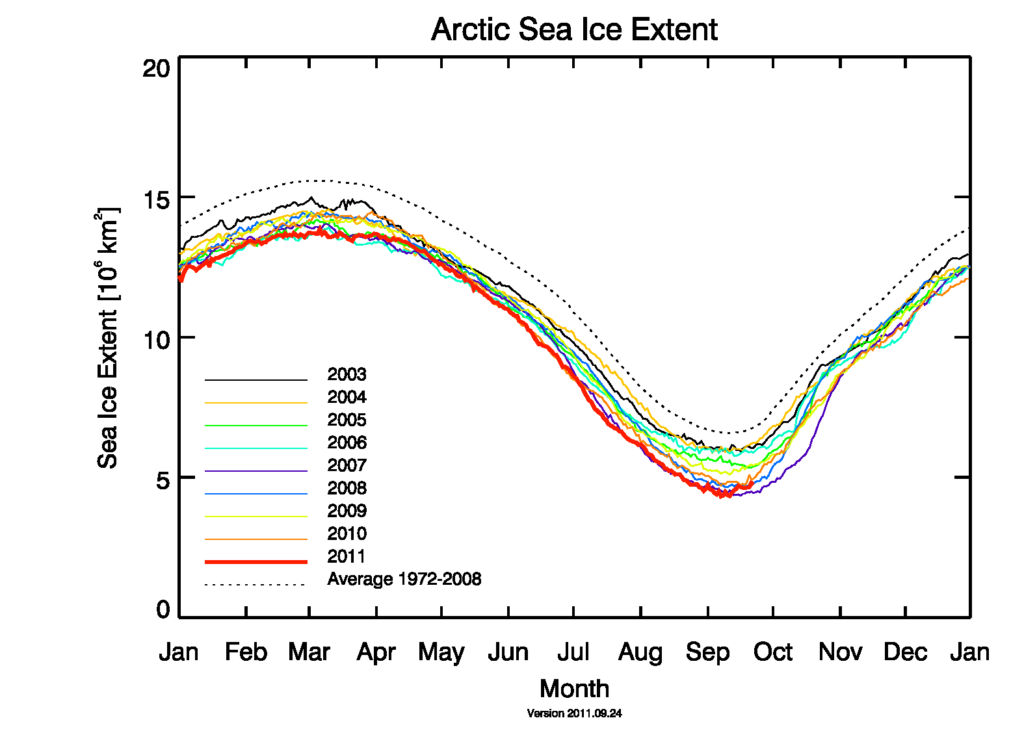 But it doesn’t seem to be the story produced by International Arctic Research Center/Japan Aerospace Exploration Agency (IARC-JAXA): 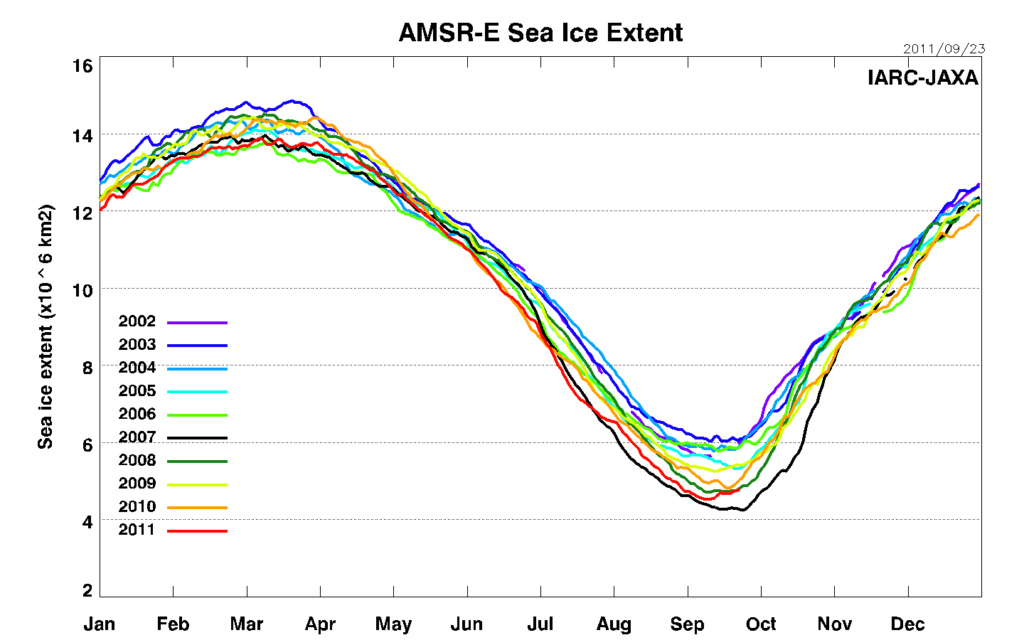 And it doesn’t seem to be the story produced by The National Snow and Ice Data Centre in the US: 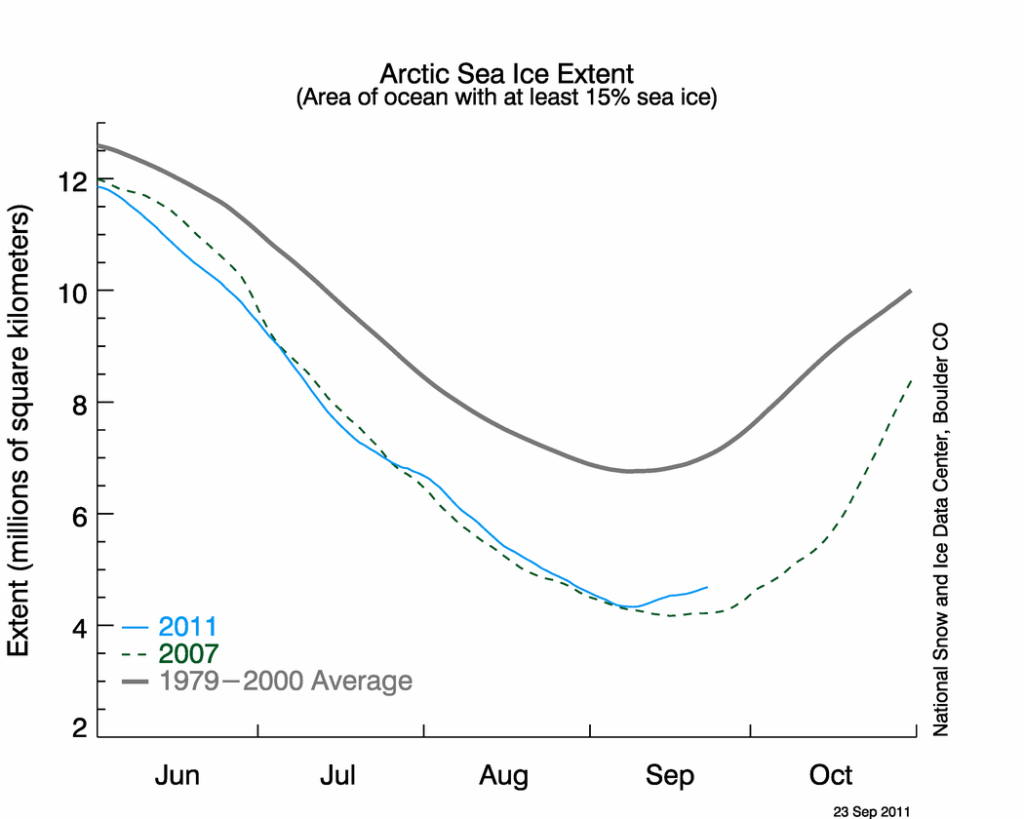 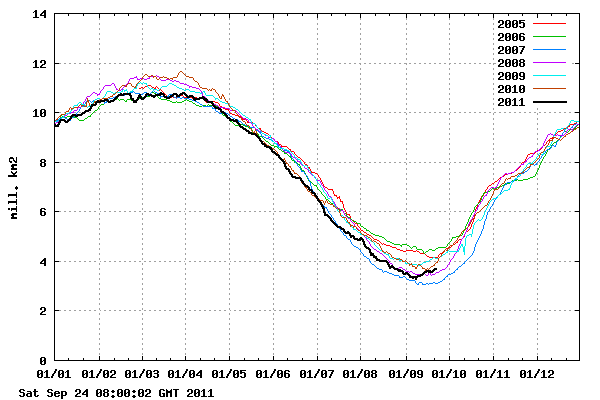 And so too have the Nansen Environmental and Remote Sensing Center: 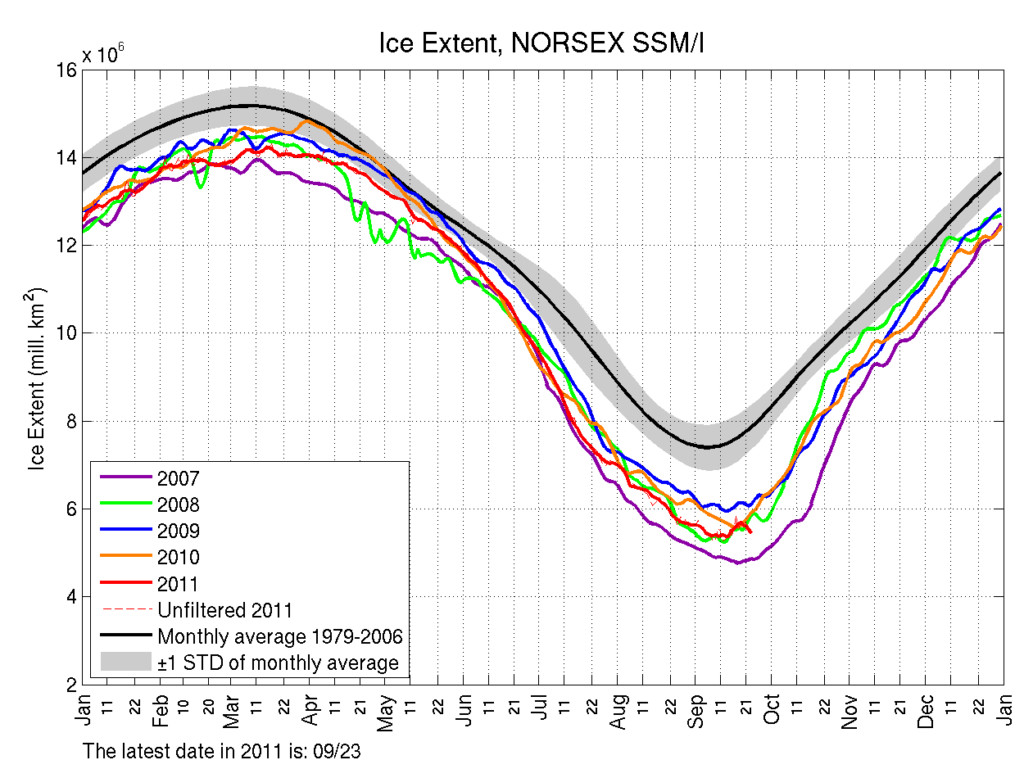 And if that’s not enough, the National Oceanic and Atmospheric Administration story doesn’t match Carrington’s claims either: 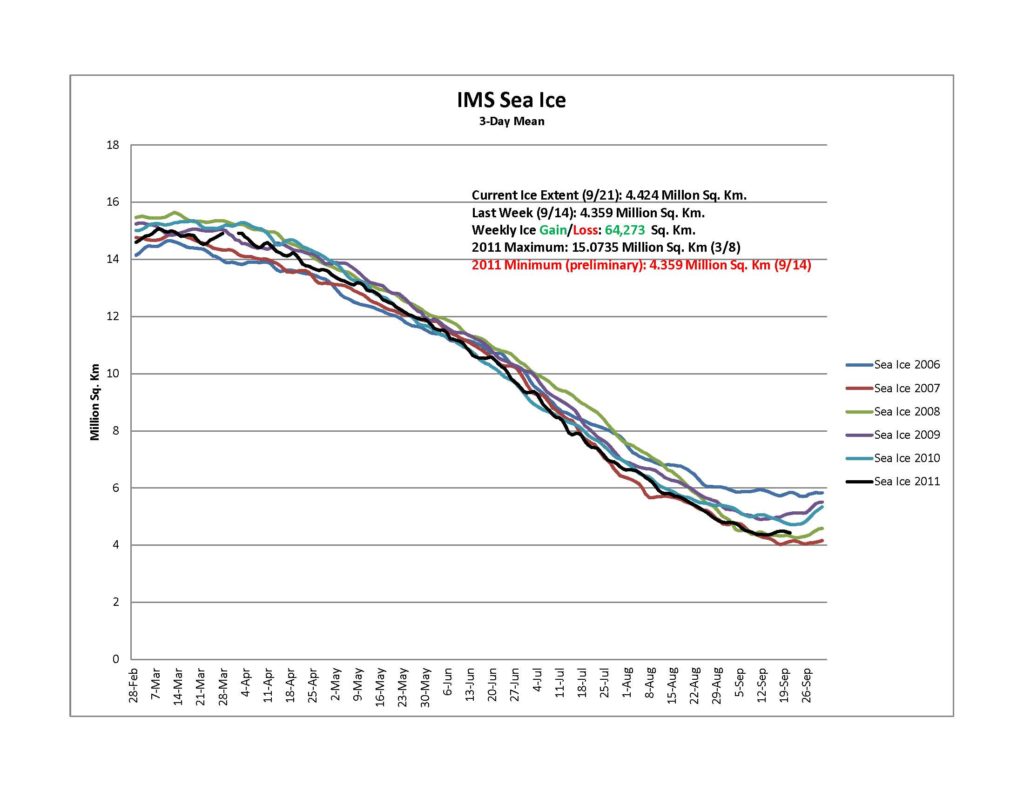 Carrington wanted to give significance to a new record being set. But it seems to have been set only according to one out of six measurements of sea ice extent. He could have checked. He could have looked at Anthony Watt’s site. But if he had, he would be left without a muse, where would his poetry be then?

Carrington, the poet, wants to paint a picture of the world, in which its white parts drain away. He wants to convey a feeling, not unlike the disappointment children experience when they see crisp white snow turn into muddy slush. The real picture of the world’s ice, however, requires grown up eyes.

There may well be a trend towards an ice free world. But there is a great deal of sea ice remaining. The 30-year record, which Carrington believes is waving at us, begging for a ceasefire, hardly depicts this drama.

But it gets worse. (It always does.)

The lower glaciers are doomed. Kilimanjaro may be bare within a decade, with the Pyrenees set to be ice-free by mid-century and three-quarters of the glaciers in the Alps gone by the same date. As you climb higher, and temperatures drop, global warming will take longer to erode the ice into extinction. But at the “third pole”, in the Himalayas, the ice is melting as evidenced by dozens of swelling milky blue lakes that threaten to burst down on to villages when their ice dams melt.

As has been widely discussed in recent years, if the ice on the top of Kilimanjaro does disappear, it will not be the consequence of warming. The glaciers there have been in retreat for longer than can be accounted for by climate change, and the temperatures there are not sufficient to explain the recession as the consequence of melting. And the Himalayas….

The threat posed is far greater than even this terrifying prospect: a quarter of the world’s people rely on Himalayan meltwater, which helps feed the great rivers that plunge down into Asia. The Yellow, Yangtze, Mekong, Brahmaputra, Ganges and Indus nourish billions and will eventually lose their spring surges.

Even if we take at face value the claim that a quarter of the world’s population rely on Himalayan meltwater — which doesn’t seem plausible to me — why should we imagine that they will always rely on the meltwater in the future, whatever the fate of those glaciers? Even if the glaciers melted — which we now know is a prospect that has been deferred by some three centuries — rain and snow would still fall on the mountains, and make their way to the sea. It should not be beyond the minds and means of a billion or more Asians to find ways of halting the water’s progress, and containing it.

So what is Carrington up to, with all this revision of some of the most absurd global warming alarmism that has materialised over the last few years?

Perhaps it is because ice is at the cold heart of all our deepest global warming fears that climate change sceptics wield their picks so heavily on it. The error by the publicists and cartographers of the Times Atlas, who stated that Greenland’s ice cover had shrunk by 15% since 1999, prompted a renewed sounding of sirens by climate sceptics who saw another example of rampant alarmism by warming fanatics. In fact, it was climate scientists themselves who sounded the alarm, prompting the Atlas publishers to promise a new map would be inserted.

Aha! Carrington senses that the ‘climate change sceptics’ have stolen a march. And rather than letting them steal the show, Carrington rushes to make the claim that it was the scientists who saved the day, after all, spotting the error.

But if it is important to state which side’s champions were instrumental in identifying the truth, it ought then to be important to state who precisely was responsible for propagating the misinformation. As Bishop Hill pointed out, it was the Guardian’s Environmental Editor, John Vidal, who had said,

The world’s biggest physical changes in the past few years are mostly seen nearest the poles where climate change has been most extreme. Greenland appears considerably browner round the edges, having lost around 15%, or 300,000 sq km, of its permanent ice cover. Antarctica is smaller following the break-up of the Larsen B and Wilkins ice shelves.

This was ‘churnalism’. Vidal had merely copied the claim made by the press release announcing the Times Atlas,

For the ﬁrst time, the new edition of The Times Comprehensive Atlas of the World, published on 15 September, has had to erase 15% of Greenland’s once permanent ice cover – turning an area the size of the United Kingdom and Ireland ‘green’ and ice free… Cartographers of the atlas have sourced the latest evidence and referred to detailed maps and records to conﬁrm that in the last 12 years, 15% of the permanent ice cover (around 300,000 sq km) of Greenland, the world’s largest island, has melted away.

Rather than quiet reflection on their own errors, Guardian environment staff make noisy statements, hoping to recover their credibility. Does this not speak loudly to the fact that these writers are engaged in a very political debate: they sense that the embarrassment caused by the Times Atlas affair undermines the wholly alarmist argument they have been advancing; they have lost ground to ‘the sceptics’, which must be recovered. Thus, Carrington waxes poetic on what the melting ice portends, before reaching for… grasping for… facts that will give this lyricism some substance. And he grasps for facts that do not bear the weight of the political argument. There doesn’t seem to have been any record set on the Arctic Sea this summer. There is still a great deal of ice left on the world. Kilimanjaro’s glaciers are not victims of climate change. People living beneath glaciers are not so dependent on them. Clinging on to these long-debunked claims is an attempt to keep up appearances: to sustain the view of the debate they have been maintaining for far too long.

It was scientists, not some imagined group of ‘sceptics’, who corrected the Times Atlas. But in the same way, it isn’t ‘the sceptics’ who embarrassed the alarmist fools at the Times Atlas and at the Guardian; they embarrass themselves.