The Poverty of 'Development Goals'

Roger Pielke asks an intriguing question on his blog:

The UN Millennium Development Goals (pictured above) focus attention on helping improve the lives of poor people around the world. In the words of the UN:
[The eight goals] form a blueprint agreed to by all the world’s countries and all the world’s leading development institutions. They have galvanized unprecedented efforts to meet the needs of the world’s poorest.
Question: Why is energy access not among the goals?

It is a good question. The UN aim to ’empower’ women, for instance, but what good is being empowered, when you have no power? The freest woman in the world would have nothing to enjoy if she has no running water (also not mentioned), electricity, and access to transport. What’s the point of political liberty, if there is no material liberty?

But look also at the fact that these goals are actually rather limited aspirations. They speak of combating HIV/AIDS, malaria ‘and other diseases’, but why not eradication. They only aim to eradicate extreme poverty and hunger. The problem with setting ‘goals’ is that, fundamentally, they speak of the impossibility of solving them. After all, these are problems which legitimise supranational organisations such as the UN.

I don’t wish to sound harsh… Many of these aims are laudable. I think the UN probably is good at ‘combating’ disease. I think that it is appropriate to have an international organisation to deliver that kind of good. But what business is it of the UN’s to ‘promote gender equality and empower women’? I believe strongly in the idea; but I think it’s probably up to women to empower themselves. It wasn’t men being nice and generous that led to the extension of the franchise to women in the UK, for instance. So why not have an international project to deliver or fund disease eradication and universal education? But why aim to ‘ensure environmental sustainability’ at the same time? And what if these objectives come into conflict? What if disease, poverty and hunger are ‘environmentally sustainable’ and their cures — never mind the palliatives — aren’t ‘sustainable’? After all, we don’t see many people suffering extreme poverty where they have access to energy.

Last on the list — but I believe to be the fundamental — is the ‘global partnership for development’. It’s a nice piece of fluffy jargon… Who isn’t in favour of global things, especially partnerships. But the problem with partnerships is… other people. If I want to do something, I have to ask you first. Says the UN,

The Millennium Goals represent a global partnership for development. The deal makes clear that it is the primary responsibility of poor countries to work towards achieving the first seven Goals. They must do their part to ensure greater accountability to citizens and efficient use of resources. But for poor countries to achieve the first seven Goals, it is absolutely critical that rich countries deliver on their end of the bargain with more and more effective aid, more sustainable debt relief and fairer trade rules, well in advance of 2015.

So the terms of ‘development’ aren’t set by those who need it. The UN says that the governments of poor countries ‘must do their part to ensure greater accountability to citizens’, but in reality, they’re accountable to the UN, to their creditors, and to NGOs, who presume to act in their interests, as discussed previously on this blog. Don’t take my words for it. Searching the web for discussions and articles by people involved in the development agenda reveals a lot. I got this passage by searching for ‘MDGs’ and Christian Aid, for instance.

The European Commissioner called for an end to capital flight which, in his view, costs poor countries seven times what they receive in aid. In fact everyone agreed that we would never eradicate poverty without addressing capital flight and tax dodging which we estimate costs developing countries $160bn dollars a year.

Gay Mitchell MEP said this money could save the lives of 350,000 children each year and this outflow needs to stop.

This is where I got excited. Having spent most of my waking hours in the past year talking, writing and dreaming of governments taking Christian Aid’s proposals seriously the head of the OECD said this: ‘Country by Country reporting and Automatic Information Exchange are anathema to those wishing to avoid or evade tax and we should pursue them’.

This is a clear signal that Christian Aid’s proposals make sense, but that it is a matter of political will to make them happen.

It is also a clear signal that Christian Aid and our partners have been successful in putting this issue firmly on the agenda of those in power.

The words belong to David McNair Christian Aid’s senior economic justice adviser. It’s curious that someone so concerned about ‘justice’ should be so keen on undemocratic, unaccountable NGOs influencing undemocratic and unaccountable supranational policy-making processes. Christian Aid may well point out that, in a world dominated by powerful interests, the least powerful lack representation, and are unable to assert themselves in the policy-making process. Maybe so. And maybe even ‘capital flight’ is a problem for those people capital certainly seems to flee from.

But surely creating capital is equally an important issue. (And this is why I chose to search Google for ‘Christian Aid, alongside ‘MDGs’). What do Christian Aid have to say about that? A report published by Christian Aid this week, argues that

In recognition of the challenges facing agriculture, donors and governments have in recent years made welcome new political and financial commitments to smallholder farming, especially in Africa. However, as this report outlines, the solutions for Africa advocated by donors, governments and the initiatives of private foundations have tended to centre around the promotion of synthetic fertilisers and pesticides, which are costly for farmers and very often resource depleting. This drive for a new ‘Green Revolution’ for Africa has tended to sideline more sustainable, farmer led approaches. For example, recent input-subsidy programmes in Africa have brought significant short-term benefits in certain cases, but they are looking increasingly unsustainable and risk sidelining investment in greener alternatives. And our research identifies concerns that the agro-dealer networks funded by the Alliance for a Green Revolution in Africa (AGRA) are selling ever more quantities
of agro-chemicals to farmers, thus marginalising the space for alternative approaches that are more sustainable.

We define sustainable agriculture as a way of producing food that balances the economic, social and environmental aspects of farming. It is an approach that minimises or avoids chemical inputs, uses resource-conserving technologies and materials available on the farm, and draws and builds upon the capacity of farmers and community organisations.

So, one reason Christian Aid seem to think that the use of agricultural chemicals is ‘unsustainable’ is because it involves the use of agricultural chemicals. If pointing out this tautologous absurdity is petty, consider also the fact that using ‘resource-conserving technologies’ paradoxically leaves the producer with fewer resources. That’s the point of using things like fertiliser. Without it, it’s just the soil, the elements, the seed and the farmer. Add the process upstream of the farmer — fertiliser production — and the downstream market, and value-added processing, and you have a system which includes primary producers in a far more complex network of people able to mobilise a greater range of resources. Farmers in the west have iPods, mobile phones, laptop computers, heavy machinery. By precluding the use of pesticides, doesn’t Christian Aid preclude the possibility of life for the poorest people becoming more sophisticated, such that they’re able to assert their own interests in the political process? What’s so good about ‘[balancing] the economic, social and environmental aspects of farming’? The point of using pesticides and fertilisers was never so that these things could be ‘balanced’. They were used to produce positive change. Doesn’t this ‘build upon the capacity of farmers and community organisations’?

Perhaps this sounds unfair. After all, Christian Aid are talking about small scale farming. But their reflection on the Green Revolution in Asia reveals some dodgy use of statistics.

Punjab is the leading ‘breadbasket’ and ’rice bowl’ of India: in the early 2000s it was contributing one-third of rice and over half of the wheat procured by the Food Corporation of India. But in recent years, wheat yields have been falling: from 4.7 tonnes per hectare in 1999 to 2000 to 4.2 tonnes per hectare in 2005 to 2006. And rice yields have grown only very slowly. A recent report on the problem stated that this trend ‘can be directly linked to the ecological consequences of intensive monoculture systems’. The state government has now responded with a programme to support greater crop diversification. 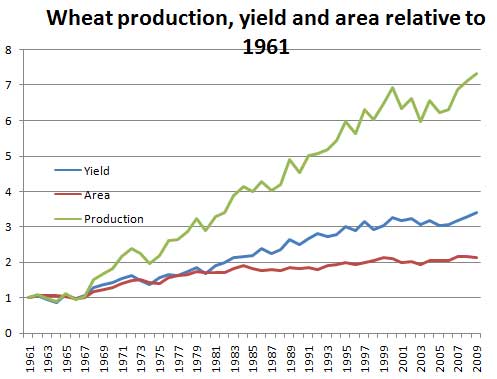 As we can see, across India as a whole, wheat yield has increased nearly fourfold since 1961. If the region which produces half of that wheat has been falling because of the ‘ecological consequences of intensive monoculture systems’, it would surely be visible. But instead we can see that the area used for wheat production remained relatively static, and production suffered a slight dip in the early 2000s, but recovered through the remaining part of the decade — the opposite picture to the one presented by Christian Aid. It is possible, nonetheless, that the loss in Punjab were absorbed by production increases elsewhere, but the point remains that the increase in yield and production across the country has been sustained, for half a century, thanks substantially to agricultural chemicals.

Now, it is still possible that what Christian Aid are saying is correct, in relation to smallholdings. It may well be the case that the economics of smallholdings are such that chemicals are inappropriate. But then, what’s so good about being a smallholder? That may sound callous, but my point is about Roger Pielke’s question: Why is energy access not among the goals?

If the economics of smallholding preclude the use of industrial chemicals, surely such ‘sustainable’ lifestyles equally preclude the connection to an electricity grid. After all, if the farmer doesn’t produce sufficient surplus to pay for chemicals, how will he be able to afford his electricity bills? How is he going to pay to be connected to water infrastructure? And if there’s not enough capital being produced for these things, what sense does it make to talk about the other development goals? How is anyone trapped in subsistence going to find the time to let their children study; to combat extreme poverty and hunger; argue for equality; reduce child mortality; improve maternal health; and combat HIV/AIDS and other diseases… They are too busy meeting the two MDGs taken more seriously than any other: ‘ensuring environmental sustainability’ as their part of the ‘global partnership for development’.

I think we have an answer to Pielke’s excellent question. Energy access is not among the goals set by the supranational political institutions, NGOs, and national governments that dominate the development agenda because it doesn’t fit with their vision of how people should live. Neither does the use of agricultural chemicals. Neither do lifestyles which offer more possibilities than subsistence and… guess what… dependence on the generosity of self-serving supranational political institutions, certain national governments, and NGOs. These entities are in turn dependent on the poverty of others for their own legitimacy. Chemicals and electricity would tear through that relationship of dependency, and that’s the reality of the ‘sustainability’ agenda.