Who Are the 'Reality Checkers' Kidding?

Polly Curtis is the Guardian’s ‘reality checker’. Today’s she’s been live-blogging the debate about the margins of the ‘Big Six’ energy retailers, discussed here yesterday.

Reality check: Are energy price hikes inevitable?
Temperatures are about to plummet and energy bills soar with gas and electricity bosses claiming further rises are unavoidable. Are the price rises really inevitable? Polly Curtis, with your help, finds out.

I’ve always wondered how firm the grip that The Guardian and its staff — much as with the environmental movement more broadly — have on reality. Indeed, Curtis’ attempts to get to the bottom of the debate does little more than reproduce official arguments put out by the government, quangos and NGOs. As such, then, she only reproduces official reality. The problem here is, as has been discussed previously, the UK’s energy policies have been essentially drafted by NGOs, and quangos are defacto government bodies, who aren’t really able to criticise policy in any meaningful way.

There’s plenty to take issue with in Curtis’ account of the fiasco. This is perhaps the most bizarre.

This is the most striking set of figures I’ve seen. This graph documents the price changes at the big six suppliers for an average dual customer paying by direct debit over the last seven years. It’s quite breath-taking how tightly they mirror each other, and how in the last two to three years the variability has reduced. I think it demonstrates a total lack of competition in the market. 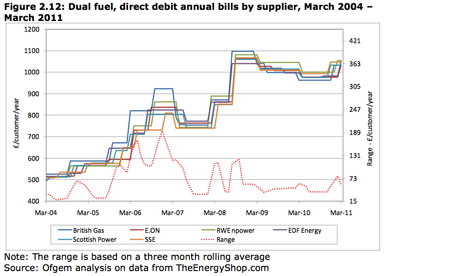 The reason the curves ‘mirror each other’ so ‘tightly’ is that the margins are so low. In other words, there is a great deal of competition in the retail market. If there was no competition, you would see higher margins.

This, however, makes slightly more sense…

The other area where the government is putting pressure is by making wholesalers sell more energy on the open market, instead of to their own retailers, in order to allow new providers to enter the market and improve competition.

… But only just. The figures produced by OFGEM, which have sparked this row do not discuss the difference between the retail and wholesale parts of the ‘big six’ energy companies’ groups. And the ‘competition’ this will seemingly create is still only competition in the retail market, not in the wholesale market, which, thanks to the UK’s renewable energy targets, is heavily regulated… Suppliers must take a rising percentage of their energy from renewable producers, and so on.

This, however, is completely nuts:

• Over the long-term it is very likely that the unit costs of energy will rise as resources become scarcer, the UK becomes more dependent on imports and there is a bigger shift towards green energy policies.

Curtis has just forgotten about 200 trillion cubic feet of gas, sitting under the North of England. She needs a reality check herself.