The Science is Not Available at the Moment, Please Leave a Message

A Guardian editorial speaks ‘In Praise of Plunge‘…

The arts have a patchy record on the subject of climate change. Greenland at the National Theatre was a play about environmental disaster that was little short of a disaster itself. The temptation is often strong to be preachy. Which is why Michael Pinsky’s Plunge is so interesting. Without any accompanying signage, fluorescent blue rings have appeared on three of London’s most prominent columns – in the City, in Covent Garden and just off the Mall. They could be mistaken for those ultraviolet fly zappers popular in kebab shops. But this clever installation marks sea level some thousand years hence. The science is not available to make accurate forecasts on this timeframe, so Pinsky’s premise that the sea will rise 28 metres is an imaginative one. But imagining a world where St Paul’s Cathedral, the Donmar Warehouse and the Athenaeum are all under water powerfully makes the climate change point.

‘Plunge’ is apparently some of that ‘art’ stuff, on the theme of global warming. 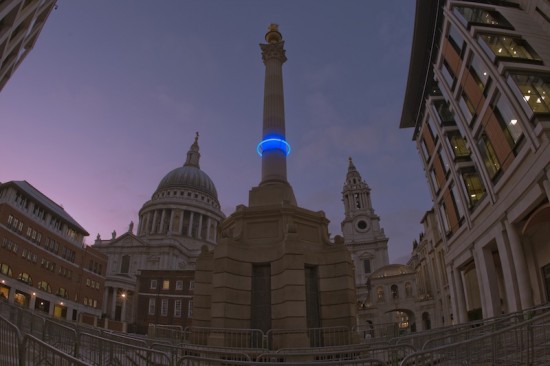 Apparently the blue ring ‘marks sea level some thousand years hence’. But as Geoff observes in the comments, the Grauniad has to admit that ‘The science is not available to make accurate forecasts on this timeframe, so Pinsky’s premise that the sea will rise 28 metres is an imaginative one.’

No it isn’t, ‘imaginative’! It’s simply obvious. And is it any more ‘artistic’ than a tidal gauge? It’s just a blue ring of light, stuck on a column. It’s the kind of idea you might have picking your nose, when not really watching a TV programme — or something else as banal as the ‘art’ itself. Art imitates life, after all.

This is more of that Guardian making stuff up again, isn’t it… ‘Fake, but accurate’ on their view. But simply absurd to everybody else.

The Guardian lost 17.74% of its circulation over the year to January – nearly one in five readers of its print edition (who are spared most of its ecobabble). That’s the trend they should worry about.

I hope the Plunge continues.