Hoist By His Own 'Ticking Time Bomb' Petard

Barry Gardiner MP has a written an article for the Guardian, which complains that ‘This government’s energy policies are a timebomb‘.

Sometime in 2018 or shortly thereafter, the UK will experience a crisis. Electricity supply will not be enough to meet demand. When this happens, people will look back to 2012 and the disastrous policy decisions taken by the UK.

The first is the publication of the draft bill on electricity market reform. The second is the imminent decision to cut potentially as much as 25% from onshore windfarm subsidies.

This complaint seems to be that uncertainty about the details of energy market reform, and the possibility of a cut in subsidies have dented investor confidence. No investment, no wind farms. No wind farms no plug to fill the UK’s energy gap.

What has become clear is that the government cannot rely on the market to supply the £110bn of investment in generating capacity that will be required to replace the old nuclear and coal power stations, which are likely to be turned off after 2017.

If this is news to the coalition, it must be news to Ed Miliband, leader of the Labour Party. And it was under that party’s administration that the existing arrangements were made. They came to office fifteen years ago, and made the environment central to their policy-making. Miliband himself sought to champion the climate issue internationally, and fought for tougher emissions and renewable energy targets in the UK, in the EU, and in the world.

Gardiner’s emphasis is on the financing of low carbon energy. Now he is in opposition, he has the luxury of criticising the coalition’s policies. But the current and previous government have both operated on the basis that the right policy framework would… for sure… create the conditions for investment in renewable energy. And compare the difference in rhetoric. In 2008, politicians like Ed Miliband and Peter Mandelson were talking, not about ‘keeping the lights on’ — avoiding an energy gap — but a ‘green industrial revolution’. The UK was set to become a world leader in renewable energy and other green tech. As I wrote in 2009, the government believed that nearly half a million jobs would be created by 2017, meaning that 1.3 million people would be working in the provision of environmental goods and services. Since then, unemployment has risen by nearly half the number of jobs promised. And the promises of jobs and an ‘industrial revolution’ have turned into threats about ‘timebombs’.

Gardiner should admit that if the current government is wrong to believe that the market would supply the finance for the UK’s energy ‘transformation’, so were his own colleagues in the Labour Party.

The current government’s desire desire to change the energy market and subsidies for renewable energy are not whimsies. They may be poorly conceived, but they are at least owed to political, economic and material reality: there is no real public appetite for renewable energy, and it has embarrassed the current and previous government; it is expensive and increasingly so, and the level of subsidisation is further embarrassment, and likely to cause further hardship; and renewable energy as it currently exists simply doesn’t work as it is intended. If the current government’s policies existing and planned policies are ill-conceived, messy, and likely to fail, then so were the Labour government’s.

The real lie that afflicted both governments was that you can pull policy levers, and material, economic and political realities will adjust themselves accordingly. Promises of money for investment, in the form of subsidies for renewable energy did not cause wind industry to boom. The following graph shows the cumulative capacity of planned, approved, refused, and built onshore wind farms in the UK, data from the Renewable UK website. 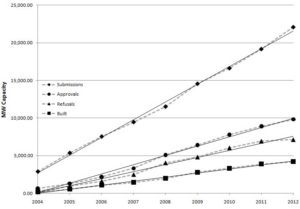 As the graph shows, onshore wind capacity has grown linearly, at a rate of about 485MW per year. In spite of claims that it was wind farm campaigners and climate change sceptics that stalled this progress, the rate at which wind farms have been given planning consent is more than double the rate at which they have been built. Clearly, therefore, there has been very little investment in the machinery which installs wind turbines. One explanation for this is the possibility that investors were never confident in the UK renewable energy market, in spite of the UK’s policies. Another possibility is that grid integration problems have stalled progress. A third explanation is that developers were ensuring the highest profits by ‘gaming’ the Renewables Obligation system — putting too much capacity onto the grid would mean devaluing the fake commodity (Renewables Obligation Certificates) invented by the government, to encourage investment.

Whatever the cause of the wind sector’s inertia, Gardiner’s own lie is the idea that this inertia could ever be overcome. At the rate at which wind farms have been built in the UK, and assuming a load factor of 80% for conventional and nuclear generating capacity and 30% for wind, it would take an entire century to fill the UK’s energy gap with onshore wind. So in order to have the 18GW gap closed by 2018, the rate of build would have to increase by a factor of 16 — and we have not even considered the problems of backup and intermitency. Does Gardiner really believe that the difference between the coalition’s policies and his own analysis amounts to this much?

Of course, there are other ways of producing energy that both governments have considered. The point is to emphasise that wind energy cannot, as Gardiner seems to believe, make any meaningful contribution to the closure of the energy gap by 2018. The point is, his own claims do far more to injure his own argument than they do damage to the Government. For instance, he continues,

In principle, a contract like this should work to incentivise investors and dispel their concerns over any future price uncertainty. The problem is that our government has caused real disquiet among the investment community because it has prevaricated about just who will sign these contracts. The government initially claimed that National Grid would be the counterparty, but National Grid has said it will not sign the contracts. The government first claimed that in the event of a default it would be the government who was sued in the courts, but claims it is the public who have to pay the contracts through their bills, and that government would not be liable. The whole thing is a mess and the uncertainty is choking off investment appetite.

He is right to say that the proposed policy is a mess, incoherent, full of contradiction, and likely to fail. He is right that investors are being put off, and were never very confidfent in the first place. But it was ever thus with the UK’s renewable energy policies, and it is unlikely to change while policy-makers labour under the misapprehension that you can simply set targets and make promises to reward investment, and LO! Britain will have a wonderful new energy grid. While this belief persists, expensive failure will follow expensive failure. It’s not the detail of the policy which is the problem, it is policies of this kind. What Gardiner forgets is reality.

Never before has the UK required investment in its utilities sector on the scale this government must achieve, nor in a timeframe so brief, in order to keep the lights on past 2018. The government has begun to close down its energy options and the British public are going to pay the price.

Gardiner is simply wrong. The government itself has no objection to onshore wind at all. But it senses that it is a political embarrassment: increasingly, people don’t want them. Visible wind turbines were huge monuments to the pioneering of energy policies, but quickly came to stand instead for politicians’ intransigence, expensive energy bills and high profits for energy companies.

And worse, Gardiner uses the energy gap — as much a problem of his own making as it is the government’s — as a weapon against the government. Here we see that the poison presented as the antidote. Ambitious renewable energy targets and over-emphasis on wind created the problem, and now Gardiner suggest more wind will be the solution. No, it’s worse than that. The problem goes back further. The failure to permit the development of new generating capacity created the problem. For decades, UK governments have been terrified of environmentalists, to the extent that they simply rolled over, rather than allowed or comissioned the construction of new nuclear, gas, coal or oil-fired power stations. The public interest was sacrificed to avoid embarrassing political conflict. Governments didn’t believe that they had the muscle necessary to fight street-level environmentalism. So they dithered, and involved the environmental movement in policymaking, an unholy union epitomised by David hug-a-husky Cameron announcing his party’s energy policies on the rooftop of Greenpeace’s London offices. Now that the problem has come to fruition, manifested in the form of an energy gap, Gardiner’s proposition is that the government ignore the growing scepticism of renewable energy policies, and anger about increasing prices. It is a lie, says Gardiner, that we can have cheaper energy. He is a liar.

We can have cheaper energy. And we can close the energy gap. It would be quite simple.

All it involves is the repeal or suspension of the Climate Change Act, and other energy policies, including the EU’s renewable energy targets. Gardiner has all but admitted that this is inevitable. There is no chance of sufficient wind or nuclear power stations being built by 2018 to close the gap, and the alternatives are fossil fuel-fired power stations. The cost of energy would be reduced by allowing different technique of finding, extracting and producing it to be developed and to compete. While policies privilege inefficient forms of energy, there is no incentive to produce any.

By invoking the ‘time bomb’ analogy, Gardiner has revealed the truth of the energy debate: renewable energy and emissions-reduction policies were always dangerous, and were gambling the UK’s energy generating capacity for political expediency. ‘Tackling climate change’ was never as straightforward as simply creating the right policies, and watching the green economy blossom. That was hyperbole — the conceit of self-serving politicians.