Opinions in the climate debate are typically given weight according to the qualification of the pundit to speak. One such victim of this idea that only the anointed may speak on matters climate-related for instance, asks “Ben Pile: Qualified Pundit or Bullshit Artist“.

Over at Bishop Hill, Andrew Montford has posted a video that would be hilarious if it wasn’t quite so tragic: the sight of climate scientist, Gavin Schmidt, refusing to debate with Roy Spencer on the John Stossel show. One does not need to be a climate scientist to recognise that there is a problem with climate scientists refusing to engage in debate. You don’t need to have a science qualification at all to know that there is something wrong with intransigence. It’s even more tragic, since Schmidt was given the “EarthSky Science Communicator of the Year” award last year. It seems that ‘communication’ isn’t a two way street.

But the logic of ‘communication’ without dialogue aside, here’s the video.

Here is the exchange which I found particularly interesting:

Stossel: Assuming this is true, why is it necessarily a problem? Warmer might be better. More people die from cold than warmth.

Schmidt: We have built a society, an agricultural system, and cities and everything that we do based on assumptions that basically the climate is not gonna change. The fact that we have so much infrastructure right near the shore is because we didn’t expect the sea level to rise. The damage that we had from Hurricane Sandy was increased because sea level has increased by ten to twelve inches in this area over the last hundred years.

So, let’s make our slightly facetious point first — i.e. in the spirit of those who demand we only speak about what our qualifications entitle us to speak of.

Even advanced degrees in applied mathematics do not qualify anyone to speak about what assumptions on which society is founded are. But what a degree from Oxford might demonstrate is that, in fact, the assumptions that society is founded on are fairly enduring. I grew up there. Two things are obvious to anyone who spent any time there with their eyes open:

1. Some of the buildings are very old indeed.
2. It floods a lot.

In fact, the city is clearly shaped by the flood plains that surround it, and cut through it. People have always known that rivers rise and and fall. Occasionally, the plains are insufficient, and houses in newer parts of town are flooded. But this is a problem caused, in the most part, by land and water management, rather than a radically different climate than those that the founders of Oxford City experienced. 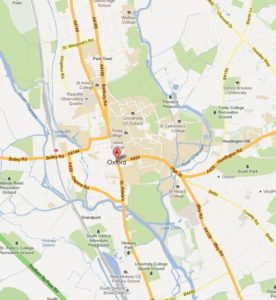 This question does not imply that Gavin shouldn’t take an interest in the wider effects or ‘impacts’ of climate, or speak about them. It’s just to say that the logic of demanding that those who want to speak about climate change have qualifications in climate science in fact excludes climate scientists from making statements about society, and the bases on which it has been built.

This leads us to a more serious question. How does Schmidt know that we have ‘a society, an agricultural system, and cities and everything that we do based on assumptions that basically the climate is not gonna change’? Whose assumption is it? When was it made?

His comments on Hurricane Sandy are revealing here. He notes the sea level rise over the 20th Century, only some of which can be attributed to anthropogenic climate change, if at all. 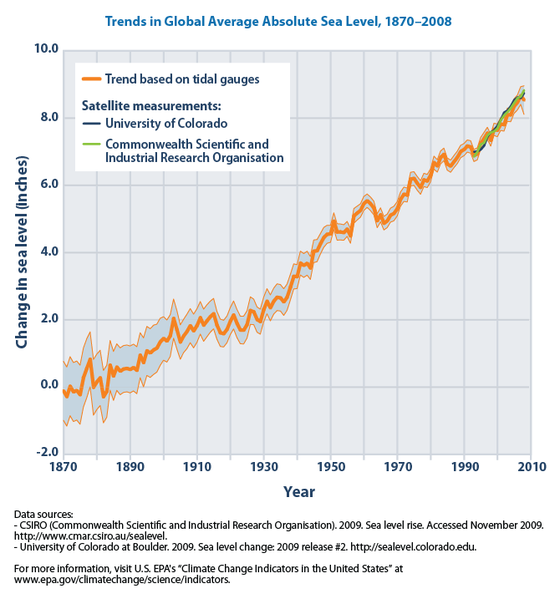 The ice2sea projections based on simulations of physical processes suggest lower overall contributions from melting ice to sea-level rise than many studies published since AR4. […] To explore these remaining uncertainties, ice2sea has used a less-formal approach of an “expert elicitation.” This method concluded that there is a less than 1-in-20 risk of the contribution of ice sheets to global sea-level rise exceeding 84cm by 2100.

Nonetheless, the alarmist press were ready to spin the good news into bad:

There is a 5 per cent chance sea level rise could go up by 84cm due to melting ice.

Said Louise Gray, the Telegraph’s Environmental Correspondent, apparently forgetting that ‘less that 1-in-20’ is less than ‘a five percent chance’. The same inability to use numbers prompted Gray’s headline:

Sea levels around Britain could rise by more than one metre (3ft) due to climate change, according to a new assessment of melting ice sheets and glaciers, causing floods in London and other coastal towns.

Only slightly less daft is Fiona Harvey in the Guardian:

Sea-level rises could send floods driven by storm surges over London’s Thames Barrier regularly by the end of the century, if nothing is done to bolster the UK’s flood defences, scientists warned on Tuesday.

But it turns out that the barrier, which was originally only intended to last until 2030, on the basis of up to 8mm sea level rise a year — much more than what we have seen since the construction of the barrier in the early 1980s — and will be replaced in 2070. In fact, the Guardian pointed these facts out in 2007 — here — so it is remarkable to see Harvey, six years later, revealing that the Thames Barrier may well be past it’s use-by date nearly a century after its construction. Journalists just don’t like good news.

The point of this, in relation to Schmidt’s claims about an assumption of a static environment is that it simply isn’t true. The concern that prompted the design of the Thames Barrier was a number of floods in the 1950s that caused hundreds of deaths in London. In the 1960s, the plans were drawn up, and construction began in the 1970s, and completed in the 1980s.

In 1968, Roger Cooke MP told the House of Commons in an appeal for the funds for the Thames Barrier:

Professor Bondi’s full report on the London flood barrier proves that the risk is real even if the floods were only a foot or so above the 1953 level. Why do we think that the risk of this surge is considerably greater than it was even a few years ago? First, geologists and geographers tell us that the South-East of England is sinking at the rate of between 7 and 12 inches every century. Therefore, even since 1953 the South-East has sunk an inch or so.

So the idea of a stable environment was not an assumption of planners nearly half a century ago. The Victorians, a hundred years earlier, were no less ignorant of the changes around them… 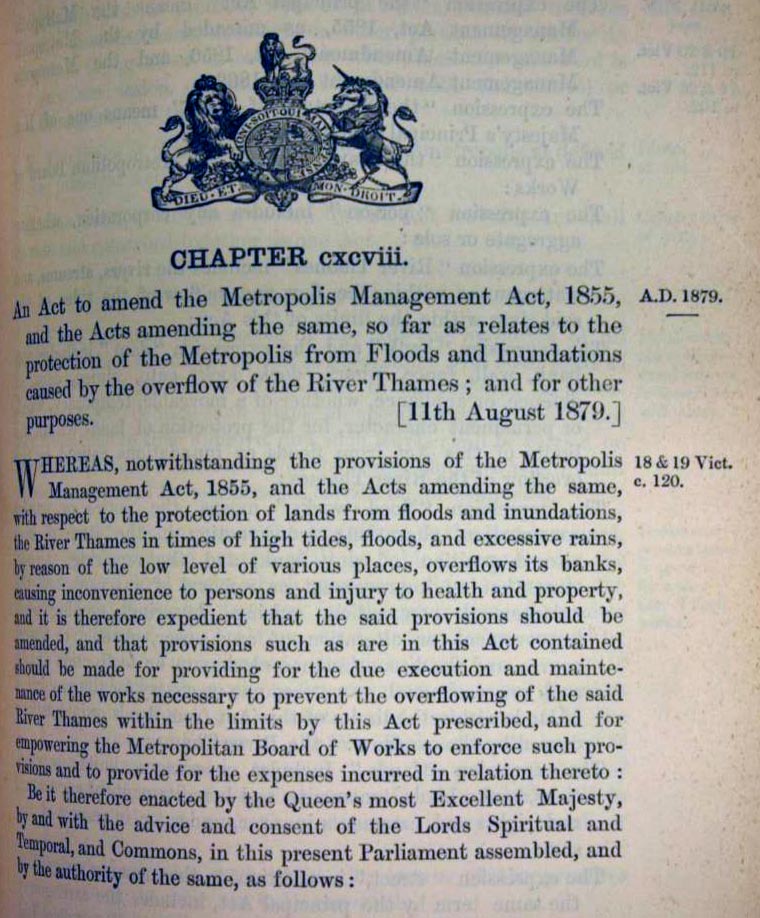 In 1879, an act was passed by Parliament mandating the construction of river walls and other floods defences.

So what is unusual about London, since the 1950s, is its lack of flooding. In spite of geological effects, and the consequences of settling next to tidal waters, which, contrary to Schmidt’s claims were understood to a greater or lesser extent, Londoners have been safer in the second half of the 20th Century than the first. And they are safer precisely because nobody assumed that things would remain the same.

There has never been an assumption that the environment will remain the same. The interactions of land and water causing problems for society feature regularly in recorded history. Similarly, agricultural productivity, in the same era, increased as we developed means to decrease our dependence on natural processes. Far from being premised on the idea of a stable climate, urban, agricultural and industrial development is premised on the idea that a better life can be be found by distancing and protecting ourselves from the elements and their whim. We work in offices, factories, studios, schools and hospitals, rather than toil in fields. We are less dependant on, and and less vulnerable to changes in the environment.

The idea of a stable world, and our dependency on it belongs to the environmentalist. It is a political idea, but which is passed off as ‘science’ in order to mandate the construction of political institutions. I came across the most explicit declaration of this I have ever seen yesterday. In the FT, the paper’s chief economics commentator, Martin Wolf, bemoaning the concentration of atmospheric CO2 reaching 400ppm opined:

Most people believe today that a low-carbon economy would be one of universal privation. They will never accept such a situation. This is true both of the people of high-income countries, who want to retain what they have, and the people of the rest of the world, who want to enjoy what the people of high-income countries now have. A necessary, albeit not sufficient condition, then, is a politically sellable vision of a prosperous low-carbon economy. That is not what people now see. Substantial resources must be invested in the technologies that would credibly deliver such a future.

Yet that is not all. If such an opportunity does appear more credible, institutions must also be developed that can deliver it.

Neither the technological nor the institutional conditions exist at present. In their absence, there is no political will to do anything real about the process driving our experiment with the climate. Yes, there is talk and wringing of hands. But there is, predictably, no effective action. If that is to change, we must start by offering humanity a far better future. Fear of distant horror is not enough.

This blog has argued that, whether or not the climate is changing, there is no need for special political institutions, or special forms of politics (i.e. environmentalism) to cope with the problems of the environment and changes within it. Rather, the ‘need’ for such institutions belongs not to the population in general, but to the political establishment. Changes to the environment did not cause the politicians of 1878 or 1963 to call for the creation of new political institutions, though the evidence of a changing environment was stark: the deaths of hundreds and hundreds of people, the loss of and damage to property, and the obstruction of day to day life. To the Victorians and the MPs of the 1960s, changes in the environment were simply engineering problems. Now changes to the environment are seen as problems caused by mankind himself — as though events like the destruction of Pompeii really could be explained by the decadence of the city’s population angering the gods, requiring that political institutions be created to ensure obedience.

Schmidt seems oblivious to the criticisms that can be made against his wondering from theoretical climate science, into total speculation about society and its functioning, and its dependence on the natural environment. He wants climate science to be able to make statements about how society works, and relates to the natural environment, and should be organised and regulated. This desire should be a clue that there is more going on in climate ‘science’ than simply science.

Worse than his obliviousness is his refusal to engage in debate about it. At least we can see in the Hansard, in the 1870s and 1960s, that debate about our relationship with the natural environment, based on the actual experience of actual people (rather than computer simulations) was allowed, was a response to people’s actual needs, and was acted on.

Perhaps the ‘sellable’ institution that Wolf is searching for, then, but the name of which escapes him, is democracy. Meanwhile, Schmidt’s silly game of musical chairs is perhaps the most acute demonstration of why environmentalism has failed: it won’t stand up for itself. It can’t stand up for any other reason than to walk away from debate. The assumption of a stable environment is defended from criticism by brute ignorance.