Buy a Newspaper, or the Planet Dies…

Over at the Guardian, Professor of Journalism and former editor of the Daily Mirror, Roy Greenslade observes that…

The Independent is up for sale. The paper’s founder, and current chairman of its publishing company, Andreas Whittam Smith, has been authorised to seek out a buyer.

The owners, Alexander Lebedev and his son, Evgeny, have been indicating for some time that they would be happy to dispose of the paper and its sister titles, i, and the Independent on Sunday.

They have made various cryptic statements over the last six months about their willingness to offload loss-making papers that they see no prospect of turning into profit.

The decline of the Independent’s circulation was something observed on this blog back in 2009.

The post was moved by comments around this particularly alarmist headline, which epitomised the Independent’s coverage of the climate story. (With a couple of exceptions).

No British newspaper has taken climate change to its core agenda quite like the Independent, which regularly publishes graphic-laden front pages threatening global meltdown, with articles inside continuing the theme.

A recent leader, commenting on the heatwave then affecting Britain, said: “Climate change is an 18-rated horror film. This is its PG-rated trailer.

“The awesome truth is that we are the last generation to enjoy the kind of climate that allowed civilisation to germinate, grow and flourish since the start of settled agriculture 11,000 years ago.”

“The Independent led the way on campaigning on climate change and global warming because clearly it’s a crucial issue facing the world,” he said.

“You can see the success of our campaign in the way that the issue has risen up the political agenda.”

“And I disagree that there’s an implicit ‘counsel of despair’, because while we’re campaigning on big issues such as ice caps, we also do a large amount on how people can change their own lives, through cycling, installing energy-efficient lighting, recycling, food miles; we’ve been equally committed on these issues.”

But it seemed, even then, that the Independent’s readers really did think that the editors were using catastrophic images to titillate an audience. Hence, I argued, the decline in the newspaper’s readership figures, 2006 to 2009.

Thus, the newspaper would go into ‘negative circulation in Summer 2018’:

I thought I’d update my graphs. It seems things haven’t got any better for the poor old Independent.

And things aren’t getting any better for the Guardian, either.

There are of course a number of reasons for the decline of ‘dead tree media’, one of which is the rise of Internet-based media. However, the internet had been around for a decade before the series above begins, during which time sales were stable, or possibly even showed an improvement.

However, I prefer a different explanation. All newspapers have lost sales. But the Independent and Guardian have suffered more than average, and I don’t believe their catastrophism is coincidental.

This blog has long observed that the more an institution embraces the climate issue, the surer we can be that the embrace signifies a crisis of some kind, analogous to an existential or identity crisis. Political parties, trade unions, and even giant corporations have sought to attach themselves to the image of planet-saving.  The newspaper resorts to climate catastrophism, not simply as some kind of pornography in order to sell copies, but to attempt to identify itself in a world it has trouble making sense of. (That’s why people buy newspapers, after all.)

This is demonstrated by taking a look back at Ian Birrell’s words. In 2006, his brief history of… erm… history was that a benign climate had ‘allowed civilisation to germinate, grow and flourish since the start of settled agriculture 11,000 years ago’, which we would be the last generation to enjoy. Equally blandly, the world might be repaired by ‘cycling, installing energy-efficient lighting, recycling’. The allusion to Nature’s Providence rules out humans as the agents in their own development: civilisation only exists because the weather was nice. The reality, of course, is precisely the opposite: civilisation exists because nature is indifferent to our discomfort, thus humans worked together to improve their condition.

Vapid accounts of human history and the forces which shape it underpin vapid accounts of the contemporary world. Such analyses become less convincing. Hence the newspapers remain on the shelf.

The shrill histrionics that pass as ‘journalism’ today reflect the authors’ own inner experiences, not a sharp focus on the world. Birrel’s naturalistic account of the world is an internal monologue, shared only by a small number of people, most of whom work in institutions that suffer the same kind of crisis. The newspaper epitomises that ideology. It is read by an increasing narrow class of people, whose ideas are shared by fewer and fewer people. The crises this causes appears to them as the End of the World, not as their own inability to make sense of it.

Environmentalists are keen on projections and predictions based on existing trends. In 2009, I ‘projected’ that, on the basis of the trend seen in the decline of the Independent’s circulation, it would reach only a negative number of people by 2018. What does the new data say about when the Independent and Guardian will close?

According to the linear trend, I may have been a little pessimistic about the Independent’s future. 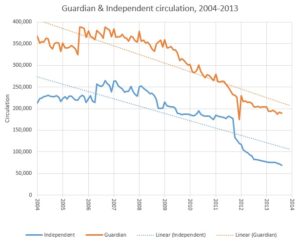 However, the fit isn’t very neat. The polynomial trend suggests a different future…

Of course, this is fun, not science. The Guardian and Independent are no more obliged to projections based on polynomial trend lines than they are obliged to follow the Climate Resistance blog’s advice that they should relax their alarmist outlooks.