Giving society cheap, abundant energy would be the equivalent of giving an idiot child a machine gun.

A point noted here often is that although environmentalists claim that their perspective is grounded in science, their desire for social control is palpable. The criticism that many advocates of climate policies make of climate sceptics is that they are driven by their distaste for regulation. Paul Nurse, for example, told an audience in Australia,

A feature of this controversy is that those who deny that there is a problem often seem to have political or ideological views that lead them to be unhappy with the actions that would be necessary if global warming were due to human activity. These actions are likely to include measures such as greater concerted world action, curtailing the freedoms of individuals, companies and nations, and curbing some kinds of industrial activity, potentially risking economic growth. What seems to be happening is that the concerns of those worried about those types of action have led them to attack the scientific analysis of the majority of climate scientists with scientific arguments that are rather weak and unconvincing, often involving the cherry-picking of data.

Whether or not Paul Nurse is right that ‘climate change is happening’, and that it has consequences for our way of life, he cannot escape the problem that he and his predecessors have sought a greater role for science, and for the Royal Society in public policy. In the foreword to the Royal Society’s brochure for its newly launched Science Policy Centre in 2010, zoologist, Baron John Krebs, said,

Today, scientific advice to underpin policy is more important than ever before. From neuroscience to nanotechnology, food security to climate change, the questions being asked of scientists by policy makers, the media and the public continue to multiply. Many of the issues are global in nature, and require international collaboration, not just amongst policy makers, but also between scientists.

In the run-up to its 350th Anniversary in 2010, the Royal Society has established a Science Policy Centre in order to strengthen the independent voice of science in UK, European and international policy. We want to champion the contribution that science and innovation can make to economic prosperity, quality of life and environmental sustainability, and we also want the Royal Society to be a hub for debate about science, society and public policy.

Krebs is, coincidentally, a member of the UK’s Committee on Climate Change — the panel of allegedly independent experts which decides the future of the UK’s ‘carbon budgets’. Being an expert on birds, he is well placed to set the parameters of UK Energy policy, half a century into the future.

The face-value reading of this ascendency of science in the political sphere is that the world faces a growing number of risks, which can only be understood by individuals with technical expertise. But another explanation of the same phenomenon is that technical expertise is sought because today’s politicians, as managers of public life but lacking the moral authority enjoyed by their predecessors, need them where they previously enjoyed a mandate from the public. The idea of exerts managing the world is an attractive one, but leaves the problem of what it is they are managing it for: what is the agenda, programme, vision? Heaven forfend that experts, like anyone else in positions of power, might be in it for themselves

The problem grows deeper. It is hard to legitimise the elevation of the expert positively. The familiar justification for climate policies — or rather, the construction of political institutions above democratic control — is the doctor analogy. According to this feeble analogy, if you were sick with cancer, you would seek out the best cancer expert you could find to treat you. Thus, the world can only be cured of its ‘cancer’ — climate change — by asking ornithologists how much carbon people in 2040 should be allowed to emit, and by asking genetic biologists like Paul Nurse what is the best form of political organisation. The elevation of experts needs seemingly technical crises: it’s not enough for scientists to discover the means to produce better material conditions for us.

So, about that expertise then…

Skeptical Science’s latest bore-a-thon is the #97Hours project, which is documenting the (literally) cartoonish account of the climate consensus with, erm, cartoons, published every hour… This one caught my eye: 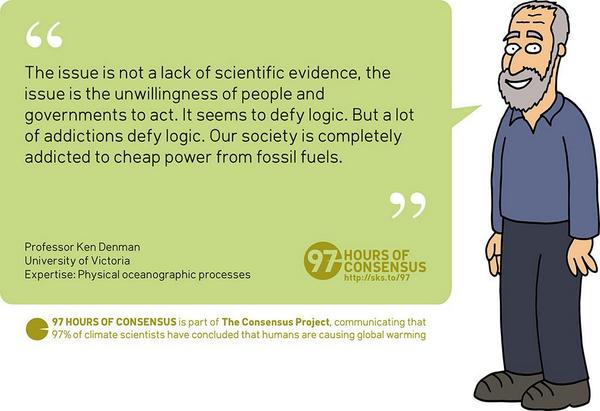 Ken Denman, who studies ‘the interactions between marine planktonic ecosystems, physical oceanographic processes and a changing climate’ has something to say, not just about policy, but the weakness of human will.

The issue is not a lack of scientific evidence, the issue is the unwillingness of people and governments to act. It seems to defy logic. But a lot of addictions defy logic. Our society is completely addicted to cheap power.

‘Our society is addicted to cheap power’, he says, echoing Pauls Ehrlich and Nurse. Leaving aside the fact that Denman’s scietific expertise doesn’t really give him any insight into ‘addiction’, much less the reasons for policy failure, and that this should give us a clue about his understanding of how science should be applied to society, I was also struck by this recent cartoon, published this week, and wondered how it chimes with Ehrlich, Nurse and Deman: 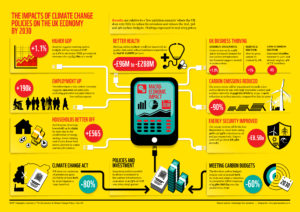 The claims are produced by Cambridge Econometrics for the WWF. Says the WWF,

Tackling climate change – with a clear policy that meets the first carbon budgets recommended by the Committee on Climate Change (CCC) – makes clear economic sense for the UK.

Reducing the UK’s carbon emissions by around 60% by 2030 (as recommended by the CCC) would:
* increase UK GDP by 1.1% in net terms
* result in at least 190,000 additional jobs being created across the UK economy
* mean households are financially better off compared to a scenario where little is done to reduce emissions.

This seems not to tally with Paul Nurse’s contention that climate policies are ‘likely to include measures such as greater concerted world action, curtailing the freedoms of individuals, companies and nations, and curbing some kinds of industrial activity, potentially risking economic growth’. Cambridge Econometrics and the WWF claim that making energy more expensive, restricting its use, and spending many billions on ‘efficiency’ in fact makes the economy grow! The full report is here.

It is bullshit, of course.

Our analytical approach is primarily model-based. The starting point is a set of detailed assessments of the cost and abatement potential of the various technologies identified in the CCC’s ‘Fourth Carbon Budget Review’. These are used as inputs to the MDM-E3 macro-econometric model of the UK economy and energy system, which gives an estimate of impacts on key industry sectors and the economy as a whole.

All three scenarios are assessed using MDM-E3, a macro-econometric model that applies economic (national) accounting identities and empirically estimated equations to model interactions between the UK economy, energy system and the environment. MDM-E3 incorporates a bottom-up approach to modelling power generation technologies and uses an input-output framework to model the supply chain effects of changes to industrial output and expenditure.

Models allow modellers to bury their assumptions, and then to hide them further from scrutiny again behind the ‘our intellectual property defence’. Cambridge Econometrics claim to be able to model ‘interactions between the UK economy, energy system and the environment’, but there is no way to test this claim, or any of the counter-intuitive claims produced by this model. It might as well make predictions about the UK’s annual production of horse feathers and unicorn meat.

Of course this ‘modelling’ exercise is intended to support the Committee on Climate Change’s carbon budgets. The UK and EU government-funded WWF have commissioned the report to suit their funders’ needs. But in doing so they have contradicted a mainstay of the environmentalist’s argument, to reveal a contradiction between claims that a reduction in growth is likely and necessary, and that climate policies can in fact produce growth. We can sustain our cake and eat it, says the WWF. In which case, then, why are the carbon budgets necessary? Why would it take far-reaching legislative action to produce the desired result: efficiency and economic growth? These are not things that typically require intervention.

This is not the only contradiction thrown up by experts pouring their knowledge into supercomputers. As discussed in earlier posts, Naomi Klein’s new book, ‘This Changes Everything’ was inspired by the work of ‘complex systems researcher’, Brad Werner, who, Klein claims, fed information about the climate into his model of the world, to determine that it can only survive if we Occupy everything, and overthrow capitalism.

Cambridge Econometric’s result is perhaps more modest. But the phenomenon is the same: researchers, standing by their black boxes, as though the boxes themselves had spontaneously produced the imperatives, without any more effort from the programmer than simply typing into it “what is two plus 2?”. It is this that we should interrogate: why all the black boxes? It doesn’t begin and end with climate models, it’s models of the universe, through to the way we organise our lives, start to finish.

Yet these models, in spite of their proximity to pure, cold, hard, objective facts — the material universe itself — produce contradictions, even when they model something as apparently simple as the climate. When they then encompass the entire environment and our interactions with it, do they get more reliable, such that we can say with confidence ‘capitalism is wrong’, or, conversely, that economic growth without destroying the planet is possible?

Models seem to proceed, using the cold reasoning of pure maths, from unimpeachable knowledge. Yet the imperatives they print out always seem to correspond to their authors’ preferences about how the world should turn. Which ones are correct?

What Is To Be Done about all these models, which seem to be instructing us one moment to march in the street and man (and woman) the barricades, the next to simply be an obedient citizen and buy an electric car and insulate your walls?