Yesterday saw the ‘Time To Act 2015’ protests in a number of cities throughout the world. The Huffington Post proudly announced ‘People’s Climate March In London Draws 5,000, Including Russell Brand And Naomi Klein‘.

Have you ever been to Central London on a Saturday afternoon? In a city of more than 8 million people, just 5,000 (0.0625% of the city’s population) is hardly a spectacle. To illustrate the point, here is one of London’s tourist attractions, the London Eye. 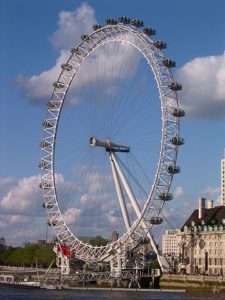 The Eye has 40 capsules, each with a capacity of 40 people, and takes half an hour to complete a trip (one revolution). The entire Time to Act march could be accommodated by the London Eye in little more than three revolutions in just over an hour and a half. As protests go, Time to Act was a demonstration of the lack of political movement behind climate action. It was a warm day. Yet people were more interested in London’s food, drink, shops, museums, galleries and big wheels than in ‘saving the planet’. It doesn’t even compare to the 1998 march by the Countryside Alliance to protest the banning of fox hunting, which drew 250,000. That’s right: more people seem to want to hunt foxes than save the planet from global warming.

One of the marchers was Labour MP for Brent North, and Ed Miliband’s Special Envoy for Climate Change & The Environment, Barry Gardiner, who some readers may remember threatened to sue me for calling him a liar on Twitter in 2012 after he repeated claims about subsidies for fossil energy he knew to be wrong. Gardiner’s tweets today were no less removed from reality:

I'm joining the march today because it's #TimetoAct2015 to save this beautiful creature from climate change pic.twitter.com/mwDgGLmkZ5

An image like this gets things in perspective & just might give us the humility to recognise it's #TimetoAct2015 pic.twitter.com/WKTEb7rSAO

This little chap says: "Hey guys! I'm still clinging on but it really is… #TimetoAct2015 " pic.twitter.com/gqfFnE84E6

#TimetoAct2015 before our bridge to a better future melts away pic.twitter.com/w4oCT7vS5O

"Still keeping my head above water… But only just!" #TimetoAct2015 pic.twitter.com/quLB0unt47

Why would any sane person want to turn this into a desert? #TimetoAct2015 pic.twitter.com/Cf6M5tuttv

How much longer do you really think we can hang on to this planet? #TimetoAct2015 pic.twitter.com/pOKs6FeDyh

How much longer do you really think we can hang on to this planet? #TimetoAct2015 pic.twitter.com/pOKs6FeDyh

These glib tweets help to show that climate activists prefer to trade in image rather than reason and debate. But it was this image which particularly sticks in the throat.

Did you ask why we need to tackle climate change? #TimeToAct2015 pic.twitter.com/AmgiEV5NTy

@BarryGardiner needs to explain how these children are victims of climate change.

@BarryGardiner And how they would be helped by climate change policies.

No answer from Gardiner, of course.

Gardiner had simply lifted the image from a stock photo library.

Corbis describe the image as follows.

Afghanistan – Daily Life – Brother and Sister in Kabul
Afghan girl holds her brother as they take a break from searching for items to recycle in Kabul.

So war, not climate change, in one of the poorest countries in the world explains the condition of the two young children.

It is heartbreaking to see such tiny children shoeless, filthy, and so utterly impoverished. And this makes Gardiner’s cynical exploitation of the image all the more revolting. It’s not merely that he wants to elicit an emotional response from you with it, he wants to make instrumental use of their image, regardless of how their condition arose and can be understood, for his own political ambitions. In other words, he has no sympathy for them whatsover, they are simply useful to him.

Imagine, if you can, that you became some victim of some event or other that left you in such a state: what clothes you had in tatters, covered in mud and dust, exhausted and utterly lost. Now imagine that somebody took a photograph of you, which was used to campaign for something that had nothing to do with the event that had left you in your most damaged, vulnerable, and helpless state. How would you feel? That’s how much sympathy Gardiner has for the children in the photograph.

Gardiner flicked through photo libraries and took images out of context, to use them in his self-serving political campaign. Is this mere, accident, thoughtless oversight, or does such casual disregard for careful argument say something deeper about politicians who seek to identify themselves by the climate issue?

If there really were an abundance of evidence that animals and poor people were vulnerable to climate change, it wouldn’t be necessary for Gardiner to search stock image libraries for content to underpin his glib sloganeering.