Oh, look, here is a “scientist” sharing that extremely weird FOI story about the team which changed the Prime Minister’s mind about climate change. You might expect a scientist to check the facts and question the motivation… But he appears to have forgotten something…

Carbon Brief — an ersatz ‘think tank’, but zombie propaganda outfit, funded exclusively by green billionaires — claim that the meeting between Johnson and scientists took place on 28 January 2020, in which the PM was forced by “The Science” to change his mind. Why would they want to say that?!!

Using a FOI request submitted to the UK’s Government Office for Science (“GO-Science”), Carbon Brief has now obtained the contents of this pivotal scientific briefing, which took place on 28 January 2020 inside 10 Downing Street.

Below, Carbon Brief reveals the 11 slides that were used to “teach” Johnson about climate change, as well as the email correspondence exchanged between leading scientists and advisors as they prepared the prime minister’s briefing.

This seems wrong, because we can know for sure that the PM was, on day one of his new job, singing about the virtues of the green agenda.

I wrote about that speech for TCW the next day, six months before the meeting…

IN HIS first session as PM in the House of Commons, Boris Johnson made two notable statements yesterday. First, he declared that the Conservative Party is the party of democracy, and that as such it will defend the result of the referendum. Second, he reaffirmed his commitment to the Net Zero 2050 target – the policy that Theresa May had stolen from his leadership campaign to secure her own ‘legacy’. Only one of those statements can be correct.

Just a few weeks later, Boris had already declared a ban on gas boilers, as I pointed out in September 2019 — at least four months before his epiphany.

NEWS emerged this weekend that the Conservative Party Conference will hear the leadership’s proposals to achieve Theresa May’s ‘legacy’ Net Zero 2050 target. According to reports, amongst the first steps on this path will be the outlawing of gas connections to any newly built home. This makes no practical, economic or political sense.

But it goes back further than that – Johnson wasn’t merely following the direction of his party.

As I wrote before he became PM, he was offering Net Zero before Parliament had even decided it…

On Twitter, the contest favourite, Boris Johnson, emphasised his green credentials, tweeting that if he won, his government would ‘legislate for net zero emissions by 2050 and embrace the opportunity of green growth for the UK as a global decarbonisation leader’. This was followed a week later by Theresa May stealing Boris’s thunder, to make the Net Zero target her own ‘legacy’, not the future leader’s promise.

And Johnson, the new Green PM, made other climate commitments too. In September, he committed £1.2 billion to green and climate causes.

And that was months before his alleged ‘conversion’…

The new Ayrton Fund launched by the Prime Minister today is an example of the UK’s ICF’s investment. The Fund will give British scientists and innovators access to up to £1 billion of aid funding to create new technology to help developing countries reduce their emissions and meet global climate change targets.

This announcement means the UK will up its ICF support to at least £11.6 billion over the next five years, between 2021/22 to 2025/26. This represents a doubling of the UK’s commitment to spend at least £5.8 billion on tackling climate change to 2021, announced ahead of the landmark Paris meeting, COP21, in 2015.

The impacts of climate change will be felt most severely in the developing world, where 100 million people could be pushed into poverty by climate impacts as soon as 2030, according to the World Bank. This significant uplift in UK aid support will help developing countries pursue low carbon, climate resilient and environmentally sustainable development.

‘We can do it’: Boris Johnson declares UK can lead the world in building net-zero economy

Just days before his meeting with scientists, Johnson — still allegedly a climate sceptic — gave hyper-corrupt agent of green billionaires, Mark Carney a new role at COP26, allowing him to further serve the interests of Mike Bloomberg. 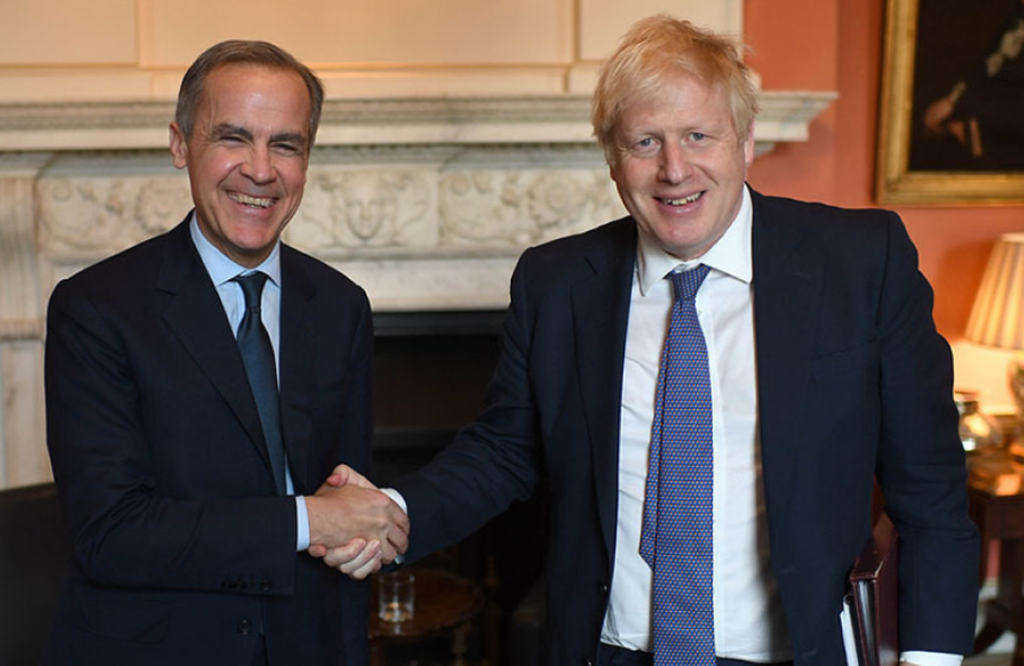 Having won the 2019 general election, Johnson pivoted the main point of the vote, from Brexit to climate, announcing his plan “to make this country the cleanest, greenest on Earth, with the most far-reaching environmental programme”.

Mr Johnson said the Tories’ victory had “smashed the roadblock” in Parliament over Brexit and put an end to the “miserable threats” of another referendum on Europe.

He added his government will put “colossal new investments in infrastructure, in science, using our incredible technological advantages to make this country the cleanest, greenest on Earth, with the most far-reaching environmental programme”.

“You voted for all these things and it is now this government, this People’s Government, it’s our solemn duty to deliver on each and every one of those commitments.”

So, the idea of Johnson suddenly being converted in January 2020 is clearly bullshit. Yet this is what the UK’s green blobbers are all trying to claim…

Made public for the first time after a FOI request from @CarbonBrief – the 11 slides that convinced the UK Prime Minister that we need to tackle climate change: https://t.co/1o1LwgIiVf

It is not plausible.

Johnson had championed Net Zero before the government and Parliament…

And he had had cross words with Trump about the USA’s withdrawal from the Paris agreement. He banned boilers, and he had given green tory cronies many £billions of public money, before even the election and before the scientists’ intervention.

Greens in general, and the CB (and its chair) in particular get very excited about FOIs, because they believe they have forced the government into admitting something. They let the excitement get ahead of the story. The clear facts surrounding the FOI are omitted. By seemingly forcing the government to admit to something, the narrative creates the idea of reluctance, and of something to hide, and a moment of transformation — Boris’s epiphany. Never mind the abundance of evidence to the contrary.

But what possible motivation could exist for spinning this narrative in this way? It may actually harm their cause. Recall that Gove has recently had to admit that the PM made the right call in apparently contradicting the science…

Levelling Up Secretary Michael Gove admits to Julia “I was wrong” to argue for additional Covid restrictions over Christmas.

This is manifestly an attempt to re-write very recent political history, for some strange end, we know not what. But it creates the hazard of merely reproducing the idea of a weak and feeble prime-minster, with only shabby commitments to ‘libertarianism’, being bounced into draconian and chaotic policymaking by his wife and “scientists”.

There is growing scepticism of the use of modelling as the basis for policymaking. I do not want to stop Carbon Brief damaging their own mission. But, all the same, they have given us an opportunity to point out the many errors at the centre of green thinking — the modelling itself, and the constant historical revision require to sustain the green agenda.